Carnage at the Worlds

Well, the world cross-country hang-gliding championship for the women’s flex wing class, rigid wing class, and ultra-light sailplane class is on. It’s taking place in Bern, Austria and I can tell you–because I follow hang-gliding competitions all over the world–that this year is quite a bit different.

A little history is in order. Back in the early days of the 70s and 80s, most hang-gliders were launched by foot, from mountain tops. So, most flying was mountain flying. It’s how I learned. In the mountains, weather can be unpredictable, gust fronts can come up in minutes, and the turbulence from higher-level winds passing over the contour of mountain ranges can create some very strange (and scary) conditions, even several thousand feet AGL (above ground level). But, in the last 10 years or so, everyone has discovered aero-tow. It’s so much more convenient. You set up your glider, get towed up and dropped off in a thermal, fly around for a couple of hours, maybe do a small out-and-return X-C, land where you launched, pack it up, and go home. Now, most of the largest competition meets are aero-tow. With 4 to 6 tugs, they can get 300 hang-gliders to 2,000 – 3,000 ft AGL in a two-hour launch window. Also notable is that since they are towing, they are not constrained to mountain flying. Thus, most competitions now take place mostly over flatland, where the texture of the air is far friendlier. But this year’s comp is in the mountains — the Austrian Alps, I should say. 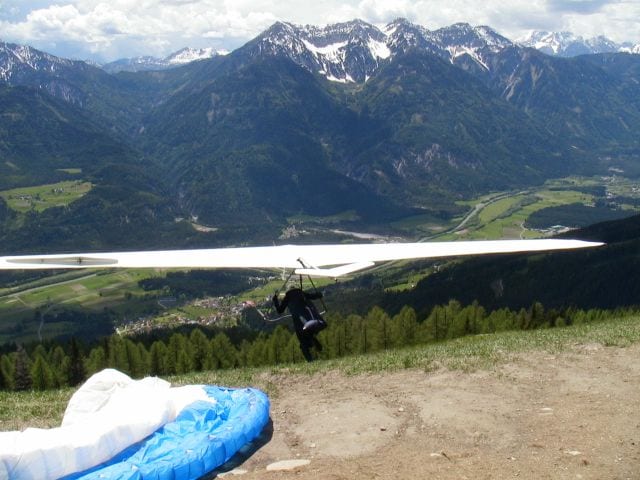 Here’s a photo of an acquaintance of mine, Vince Endter, launching from the site of the Worlds on a practice day prior to the start.

Here’s a first-hand account of day two of the competition. Just so you know, recovering from a tuck in a hang-glider is a big deal. Most tucks result in tumbles (imagine a falling leaf), followed by the break-up of the glider and tossing the laundry (hang-gliding lingo for throwing your reserve parachute).

OK, now that you’ve digested that, get a load of this carnage. Kari Castle, one of the world’s very top women pilots tumbles at 11,000 ft MSL, patiently waits for her glider to break up, then throws her chute so as to avoid having the chute bridle get wound around the glider. That’s presence of mind, I’ll tell you right here.

I met Kari once when I was still a beginner on a flying trip to the Owens Valley. Kari’s a celebrity in Bishop, CA. Glad she’s OK.