Since first jumping into the whole internet thing in 1992, I’ve encountered thousands of different people on various political/philosophical mediums of exchange, like Usenet. I’ve lightly corresponded with perhaps a few dozen of those at one time or another. Then there’s the small handful whose historical depth of knowledge and uncompromising commitment to freedom as a general principle–rather than a pragmatic convenience–make one like me sit up and take notice.

That was in about 1994, so it’s been ten years I’ve been reading Billy Beck’s stuff off & on, and dropping him an email every now and then. To give you an idea of this man’s depth, check out his reading list. I can assure you that these books aren’t mere shelf candy.

So, then, it would be no surprise that I’d take the opportunity to actually meet face-to-face. Billy was in San Francisco supervising the implementation of his set and lights design for a musical performance taking place in the downtown San Francisco Marriott. Here he is at work. 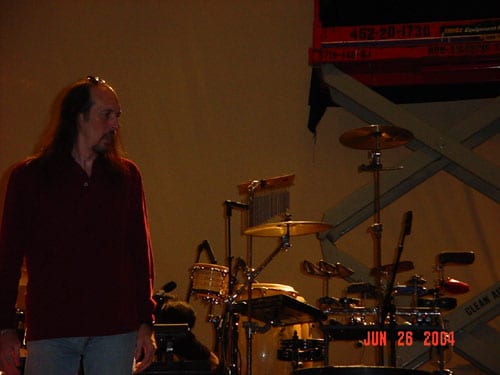 I was glad to be able to get up to The City in record time from San Jose–time enough to sit and talk classic rock music in general and guitarists in particular (Billy possesses encyclopedic knowledge in this area). Then he had to get down to the grand ballroom, so I was able to hang there a bit and witness how these productions go together, behind the scenes.

It’s the stuff you’d normally never notice. As Billy says, it’s supposed to be transparent. If the audience takes note of your work, then you’ve probably screwed up somewhere.

It was good to finally meet you, man.