The Final Penalty is Death

Have you ever stopped to consider what would happen if you refused to submit in any way to even a small injustice on the part of the state? Let’s take a parking ticket, for example. Without bothering to create a specific scenario, let’s assume that you received the ticket in error and were not in violation. That’s the premised reality for this make-believe situation. You violated no established code, but received a citation for a violation just the same, and now you’re unjustly bound up in the system—if only to a minor degree that’s little more than a troublesome annoyance.

Now, you waste more time and endure more annoyance to run through the established “due-process” to contest the citation. It falls on deaf ears. The citation stands. You refuse to pay. Eventually, a warrant to seize your vehicle is issued. One day, you’re returning to your car and there’s a tow truck in the process of hoisting it, and a cop standing guard.

You run to the car, and ignoring shouts of “HALT!…HALT!…HALT OR I’LL SHOOT!” you jump in the car, fire it up, and attempt to extricate yourself from the tow truck. The cop runs over and points a gun at you as you reach for the gun you keep next to you. BANG! You’re dead.

You’ve just paid the ultimate and final penalty for defiance of the state: death. The sate will not be defied, you see, for as sure as it’s your nature to be free, it’s the state’s nature to enslave, command obedience, and extinguish any who will not ultimately submit. Let’s not forget who initiated aggression in the above scenario. The state did. The state initiated aggression with the original citation and enforced it at every step while you were defending your right to not be tread upon at every step.

“But that’s an outlandish and fanciful story,” you protest. We’ll, sure. Most people would not risk their lives for the sake of a parking ticket. In fact, most won’t even take Patrick Henry’s wager: “Give me liberty, or give me death.” People will allow themselves to be unjustly locked up, even sentenced to death. Such is the pernicious power of master over slave.

The resolve of the state to kill those who will not bow to its will is not so exaggerated as you might think. Should I go on in attempting to convince you, or is a picture worth a thousand words? 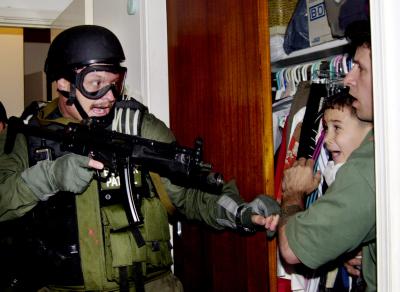 John Lopez at No Treason! Posts commentary about this article.

…As I was just sayin’ yesterday at the end of this post.

So, the next time you refer to America as a free country, take a moment to stop and reflect about what an idiot you are for saying such a patently stupid thing.

Now, for those of you waiting, asking, “Ok, so how do you propose to organize civil society if the state can’t enforce its laws, to the death if necessary?” Hey, I’m no engineer of utopias. Smart libertarians get over devising ways to engineer the human species through the maze of life early on. My purpose is to point out how our rights are violated every day of our lives, and the biggest violator is the state. I don’t require that you have an alternative way of getting through life. I require that you stop being party to it.