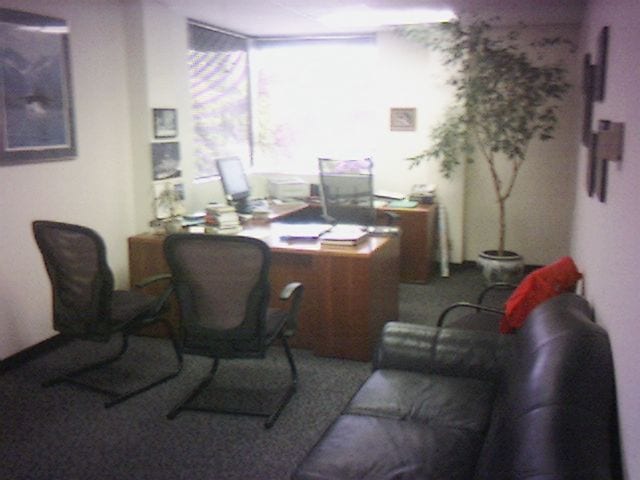 Ok, if this works, there should be a title to this post, a picture of my office displayed somewhere, and the body text you’re reading. Got an hp6315 which is a PDA, phone, and camera all wrapped into one, which I’m trying to post with via email and attached photo. It has wireless data access via GPRS and built-in Wi-Fi. Cool, to say the least.

I’ve never for one second, for instance, found much of anything to like about The Liar or his pathetic, opportunist wife; but I’ve never, for one second, suggested that they’re anything but intelligent. To make such a wildly outrageous claim would, I think, say a lot more about my state of mind than theirs. I think they’re amoral and often immoral to a breathtaking degree as master political opportunists, but that says nothing about the state of their grey matter. It goes to their spirit, of which I see next to nothing wholesome and good.

People make such charges against Bush, and a lot of other more-or-less conservatives for no other reason than their general ignorance of history and politics. They hear other ignoramuses making such charges, and without their own depth of insight or basis in facts, they parrot them. Blind leading blind.

I think Kerry, by his own demonstration, is deeply dishonest. He’s a much poorer political opportunist than Clinton because his pandering to ignorance is so obvious to nearly everyone—even those who plan on voting for him. But, he’s still pretty clever.

Here’s one case in point. One esoteric part of Kerry vs. Bush #1 was Kerry’s charge that Bush had let bin Laden get away because of the US’ use of Afghan fighters in the mountains of Torra Bora and throughout the Afghan campaign. Instead, we should have gone in with more troops, pushed the Afghans aside, and taken over. This is perfect food for those ignorant of recent political history, as well as the history of Afghanistan. How many recall during the lead up to Afghanistan, the left’s (including the elite media, as a party to the left) constant wringing of hands with respect to the history of Britain and the former Soviet Union and how they got stomped? How many have the slightest clue as to why? Probably not many who now clap hands at such a charge from Kerry in the debate. Moreover, I’d wager that not a single one of them knows that the most successful conquests of Afghanistan, by, namely, Alexander the Great and Genghis Khan, both relied heavily on allying with Afghan fighters and using them, and then letting Afghans set up their own government. Britain and the Soviets didn’t, and they paid dearly for it.

The above is merely one example. I use it because so many who read it will have had no idea of the underlying facts of the matter, and far from Bush’s administration being careless or stupid in that case, they were brilliant. Those who wait to to get their facts from the likes of Dan Rather and company do so at the risk of coming to the wrong conclusion every time. So long as people don’t step outside of their own political viewpoints, don’t listen to sources other than their own pundits, and don’t do some of their own independent education and research, they will forever be the perfect chumps for whomever first detects their ignorance and uses it to their political advantage. That goes equally for those on the right.

How unfortunate is the fruit of genius combined with pragmatism. Such genius knows the depth of ignorance that surrounds it, exploits it masterfully, and suddenly, this woeful ignorance becomes the new standard of authority.