The men’s world hang gliding championship (flex wing) is currently taking place in Hay, New South Wales, Australia. You can read all you want to about it and more in The Oz Report.

Here below is a great photo of Alex Ploner of the French team during a 180 kilometer task. I’d say he’s at least 2,000 ft. AGL. That protrusion from the right corner of the control frame is a GPS, altimeter, variometer, and flight computer all in one. 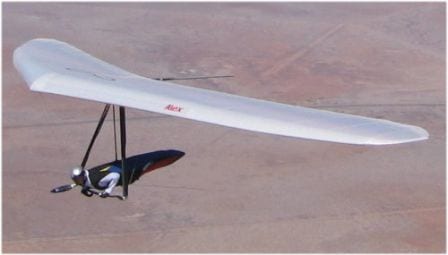 Next is a photo of a typical "gaggle." Gaggles are normal in cross country competitions for a number of reasons, not the least of which is that when someone finds lift, others are quick to join. If you look at this photo carefully, you’ll see the tow paddock below, with all the hang gliders lined up waiting for their turn for a tow. So, in this case the gaggle is for pilots waiting to take an appropriate start time to head out on the 180 Km task, which should take those who complete it about 3.5-4 hours. 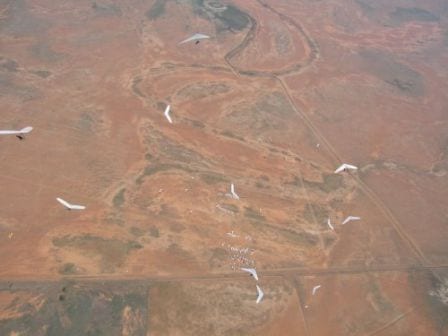 Yes, we carry emergency parachutes when we fly. It’s rare to have to deploy one, and there are plenty of people I know who have several thousand hours logged over the last 30+ years and have never deployed. Still, they are there if needed. Here’s what they look like. As you can see, they bring down both glider and pilot (though you can cut away the glider if you need to).

With the winds still strong after five days it is blowing out of the south south west at the tow paddock.  This makes for exciting towing.  Two pilots smack in right off the dollies and one throws his chute just behind the tow paddock after locking out on tow and tumbling.  I almost tumble at 400′ when I release from tow too high.  I climb out to 1,600′ and come back to land as I’m moving too quickly down wind.  Numerous dust devils race through the tow lines.  Everyone ends up okay.

The air is ratty again like the day before.  It’s just as cool.  We’ve got the same task as the previous day but with an extra turnpoint at One Tree on the way to Booligal to keep us on the road and extend the task to 188 kilometers.

The main gaggle starts at 3 PM and pilots are quickly scattered into smaller gaggles.  I’m making one low save after another but catching up with folks ahead of me.  We’re lucky if we get to 6,000′.  The thermals are tight little cores until 5 PM.

Four US Pilots will land at goal along with over fifty other pilots.  I’ll be twenty five kilometers short not showing enough patience in a light thermal. Dean will land near the first turnpoint.

Oleg wins the day with Gerolf 12 seconds behind him.

Curt, Dustin and Kevin are doing well and keeping the US in the race for a team medal.  Oleg is a one man Ukrainian team.

You can see his flight data, downloaded from his flight computer, here. The green graph is the geographical data from the GPS. The blue one is altitude plotted over time. Each peak in the graph is where he had found lift and stopped to circle in it and gain more altitude. Begin to factor in climb rates (some thermals go up at 50 feet per minute, some 1500 or even 2000 or more) and you can begin to see what a chess match a cross country hang gliding competition can be.