So I get a link to this NYT article via email today about how America is so stingy. I’m just going to throw my whole email reply up here, unedited, CAPS and all:

Sorry, but this one really, really gets under my skin.

This article is, unfortunately, an unmitigated, despicable load of crap. Americans are and have always been the most generous people (by far, far, far) of ANYONE, bar none, on earth. It’s just so wonderful how the most caring, benevolent, generous nation on earth is continually maligned from inside and out. Many should be ashamed of themselves.

America, 5% of the world’s population, gives 40% (!!!) of ALL aid donations worldwide. We pay 20% of the UN’s entire budget. We’re also the nation that spills its blood over and over and over again to assist others who refuse to provide for their own adequate defense and get trampled under foot. WWII Germany, Italy, and Japan come to mind, as well as the post WWII USSR push to spread communism worldwide.

Americans have already donated $300 million to this disaster, and that’s just the private side. It doesn’t count what the US government will spend, which will doubtless be in the hundreds of millions.

And you know what the GREATEST part of it is? Americans don’t give out of a sense of guilt or shame, and that’s EXACTLY why the left liberal way of treating these issues will never, ever resonate with them, and liberals will increasingly become irrelevant and pathetic in America. Americans give out of a sense of joy of life and benevolence. Americans love their lives so much that they’ll give much of it away because they can’t stand to see the human suffering that they know is so existentially unnecessary, and, they give out of the joy and hopefulness of seeing others with a chance to live as well as they do. Americans want EVERYONE, worldwide to be prosperous. That is a UNIQUELY American value, I can tell you, and THAT is why we give more than anyone, not because we’re ashamed of our success, as the liberals have forever admonished.

"Several people are commenting, in this and other tsunami posts, that American private contributions to tsunami relief are amounting to less than a dollar per capita. The per capita argument is the same one that the UN fellow made, and it’s bogus. There is no comparison between country A, with a per capita donation rate of $500 but only 10 people, and country B with a per capita donation rate of $0.50 with a population of 100,000. By the time all the fundraising efforts are completed, the people of the United States will have donated far more than those of any other nation on the planet. In addition, our government will spend our money on assistance. And, let us not forget that it is American planes, ships, and personnel that are doing the heavy lifting in order that the aid reach the survivors. I do not mean to denigrate the Australians and our other friends who are working just as hard. I mean to point out that we have the most planes and ships.

"The real issue is, and will be, the effective use of this money. Reports are already surfacing that the United Nations effort in the region is bogged down in choosing five-star hotels and arranging for 24 hour catering. It would appear that President Bush’s decision to form a regional coalition to direct tsunami relief was the correct one."

Beatrice & I arrived at our cabin in Arnold, California about Friday noon to a bit of snow. 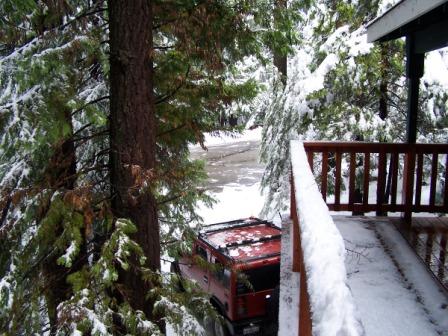 By the time we left on Sunday afternoon, there was just a bit more. 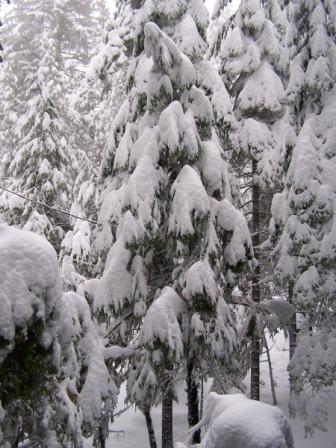 Having been gone and generally out of contact the last few days, I was darting around for the latest tsunami news and came across this:

The number of the Onge, one of the most primitive tribes, has fallen in past decades to about 100. There are about 200 Sentinelese, probably one of the world’s only surviving palaeolithic people, who are generally hostile to outsiders.

"Our helicopter pilot who flew over the island told me that he has seen several groups of Sentinelese on the beach and that when he dropped food packets they threw stones at the helicopter."

Remember that the next time you see one of those pretentious, PBS-style documentaries that implies, or even sometimes overtly suggests that we of civilization have so much to learn from the "wisdom" of uncivilization.

I mean, it was just one year ago that a 6.6 earthquake killed 41,000 people in Iran, and not even in a major city like Tehran. In 1989, the much stronger 7.1 Loma Prieta earthquake pounded a major metropolis, the San Francisco Bay Area. It killed 63 of The Bay Area’s 7 million inhabitants.

Yes, we have so much to learn from the primitive.