Terry Golway of The New York Observer is an Idiot

Want proof? Read this article in The New York Observer.

No, the reason Terry Golway of The New York Observer is an idiot is because he has no idea what the fuck he’s dealing with. There’s not a single person of his ilk (journalists, environmentalists, bureaucrats) who have a goddamned thing to do with any of this. This is happening because of some really smart people in Silicon Valley who came up with the technology and those in the auto-industry who saw the potential marriage and market, once perfected. In the meantime, fuck-head busybodies like Terry Golway of The New York Observer were busy ejaculating all over themselves alongside fantasies of an electric-car future.

I’ll bet that if I did a little research into Terry Golway of The New York Observer, I’d find that some time ago, he was all over that electric car debacle–either personally or professionally–and so I’d be able to call Terry Golway of The New York Observer and idiot for that, too. You see, the thing that people of his ilk were all about, and had their enviro-silly, bureaucrat bedfellows all over, was the electric car. There was going to be all sorts of mandates, standards, laws, regulations and such shit–and now they’re all a laughing stock. You can’t even give an electric car away. You stupid fucks got completely blindsided by people who actually know what the fuck’s going on and know how to create and produce things. You got blindsided because you’re so damned clueless about any of this.

And if that isn’t enough, you’re too fucking stupid, now, to know how clueless, wrong, blind, and narrow-visioned you were. And you still are. What an unbelievably stupid fuck you are, and those other stoopid fucks who think like you. And you preach to us about our likes and dislikes in a newspaper? Jesus.

And oh, by the way, I’m a proud Hummer owner. That’s right. It’s a vehicle to my liking. Mileage sucks, but I’m not asking you to pay for it, asshole. And screw you anyway…how much of that $60-$70 fill-up is going to taxes (not that I’m "proud" of that, by any means) that you no doubt-in-the-world cream yer britches over at each pump sighting? And, yes, the company took a whopper of a tax write-off last year. Not "proud" of that, either. It’s rather like being in the midst of being mugged and having your assailant suddenly become more interested in someone else, leaving you alone for a while. What are you going to do? You’ll take it. Nuthin’ to be proud of, though.

Here she is, in all her glory, with a hang-glider atop, no less. 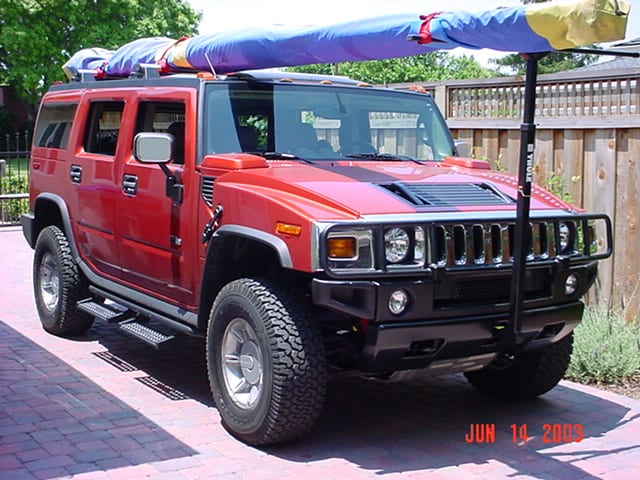