This & That
Luxury Med Cruise with VDH as Tour Guide

Prepared to be impressed? Here’s my home office network, which I’ve been messing with since yesterday morning’s activities (see the previous entry). Excuse the mess, but when you’re head deep in this sort of stuff… 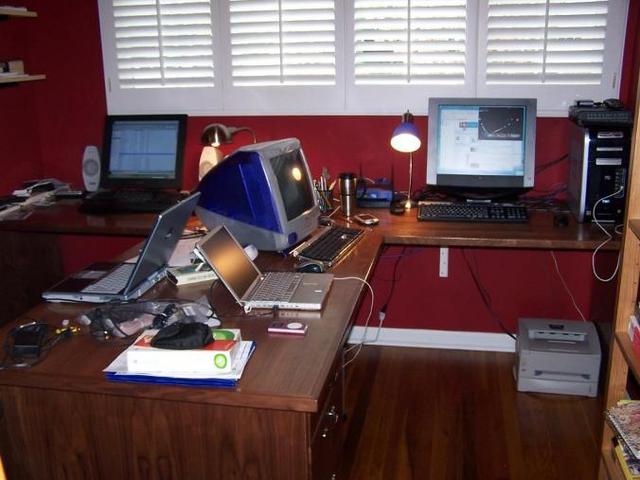 Starting from the left rear, that’s my Sony Vaio Digital Studio, and to the right, that’s a new HP Digital Studio that I just got for Bea yesterday to replace her iMac that’s sitting right there in the center. Yes, that’s a 19" Sony flat screen monitor, same as the one in my office at work. In the front, to the right is Bea’s PowerBook, and to the left, my Fujitsu Notebook.

And, guess what? They are all networked together. Not just the PCs with the PCs and the Macs with the Macs, but all together. They can all print to that laser printer (lower right), can all share files with one-another, and all share the high-speed Internet connection. The two notebooks are 802.11 Wi-Fi equipped, and so we can be hooked in to the LAN and Internet anywhere in the house, even out in the backyard. But, you want to see something really cool? 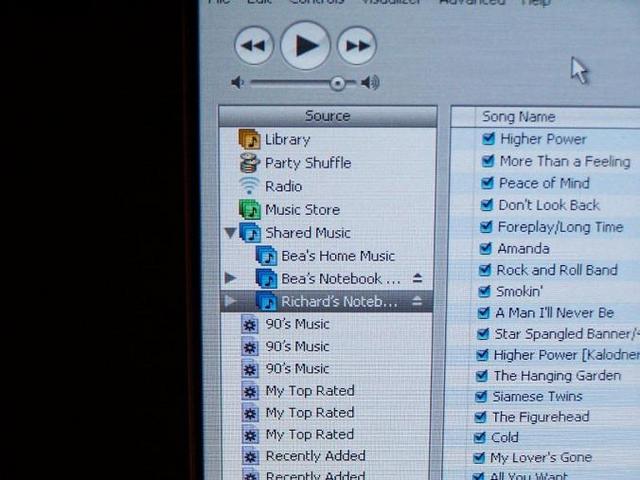 That’s an iTunes console, and I’ve got it installed on every machine. Since they’re all networked, they can share each other’s music, and you don’t have to transfer files. It just plays it on your machine right across the network. Right there, I’m playin’ somethn’ from Dire Straits that’s on my notebook, but not on the desktop. This will be useful when we have a party in the back yard. Just plug an amp and speakers into one of the notebooks, and access all other music on all other machines throughout the house–wirelessly. I told you it was really cool.

And here’s another thing. 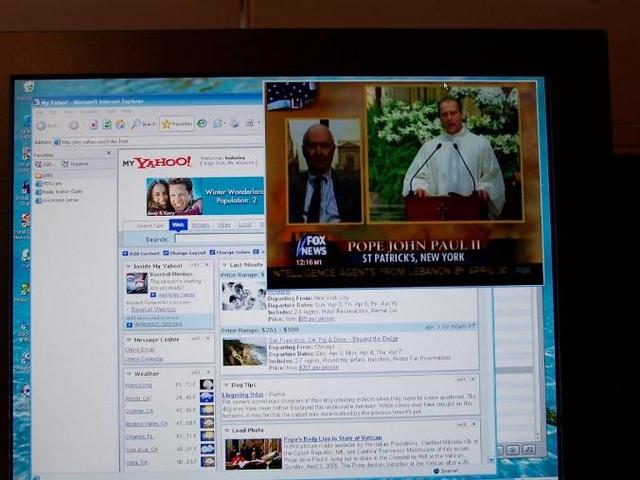 That’s Fox News playing on the new HP desktop. I’ve had the DirecTV box hooked into my Sony for a long time, but Microsoft’s new Media Center is way better than Sony’s Giga Pocket. It’s really pretty much like having TIVO in your computer. It downloads the program guide off the Internet and keeps it current, so you can pick programs to record ahead of time, or, even have it record regular programs whenever they’re on. You can pause and rewind live TV, etc.

Alright then. Back to it. Time to clean up this mess.