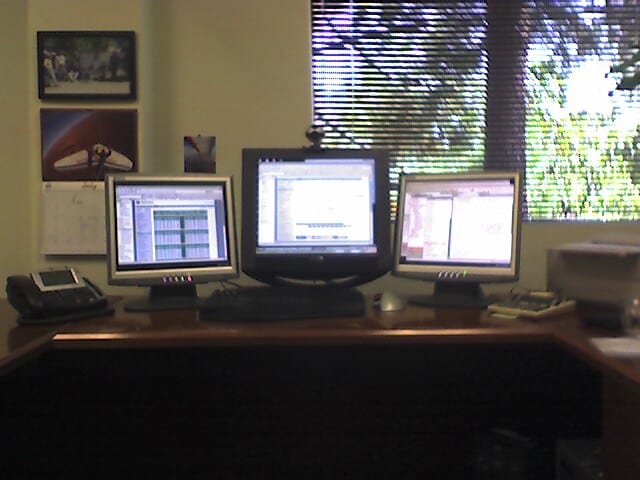 Yea, always wanted to try the multiple monitors on a single computer thing, so when we recently downsized the sales team a bit, we had some extras. Setup is easy with Win XP. My existing video card had both DVI and VGA outputs, and the Sony in the center uses DVI. So, just popped in a second VGA card and we’re done. I took the picture with my Treo 650 phone so pic quality isn’t super great. But, after the Blackberry, the HP Compaq/Smart Phone, and last, the Siemens Pocket PC/Smart Phone, the Treo is all-around by far, far, far the best.

Still figuring out how to make best use of the monitors. Initially, I had my browser open to the left, Outlook in the center, and Outlook’s calendar opened in a second window off to the right. Now, I’m experimenting with keeping what I’m actually working on front & center, and moving whatever else I want to keep in view off to either side.

I love being silly, especially to "excess."