It’s so nice to get good service. I find that I’m usually satisfied with the service I get, with the singular exception of getting my eggs truly "over easy" at restaurants. Every now and then, though, I get service that’s so exceptional that it just merits a mention.

Three years ago last July, we had an in-ground pool/spa built. 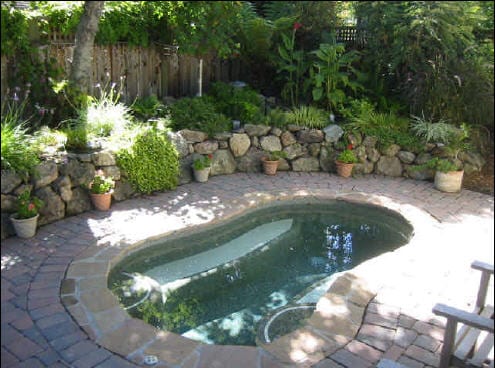 Nice, huh? It’s essentially a small pool, about 11′ x 7′ with a large pool size heater, so I can get it up to 100 degrees in about 15 minutes in the summer, and about 40 minutes in the winter. It was built by Royal Pools in San Jose, California, whose offices and showroom are only about 10 minutes away from us.

I actually didn’t even think about calling Royal at first. I called around and went to various poll supply houses, like Leslie’s and such. All of the sensors they had in stock were different from mine, and it was difficult to be sure that an ordered part (about $80) was the right one. Finally, in frustration, I called Royal to ask them from where I might be able to order it and be sure to get the right one.

So, she says, "Hang on a minute….is the electric gate  combo still ****, and do you still have Rotor?" Yep. "OK, great, we’ll take care of it." Got home that afternoon and it was all done. Rotor was safe & sound. No charge. A year and a half after install.

…I’d turned on the spa jets & heater last night around 7pm or so, ate dinner, fiddled around here and there, and then thought about getting into the spa around 9 or so. Even though it had been way more than enough time to get up to temp, I check the panel anyway, out of habit, to see what the temperature is. Instead of seeing the expected "100 Deg.," I see 68. Uh, oh. So I grabs the flashlight and head on out to troubleshoot. Nothing apparent. I cycle all the breakers on the control box. No joy. I believe I’ve isolated the problem down the the ignitor. The fan stats just as it should, the gas valve opens just as it should, but it does not ignite within the 7 seconds time allotted before the gas valve shuts.

Of course, you guessed it. This time, I wasted no time in calling Royal. Their only question was whether this afternoon would be too late, or did I need them to come immediately. This, after more than 3 years since installation.