Today I took a drive up to Sacramento to check in on a new little project. 2631 Atlas. 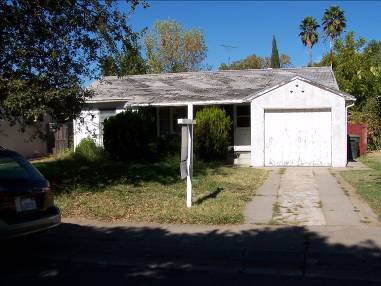 Well, this is California, so the beat-up house you see was actually acquired for the price of about $200,000. Yes, the stories you hear are true. It’s insane. But guess what’s more insane? You can still buy a high-priced fixer-upper and sell it for an even higher price. Which means, rather than being scared off by the insane California prices, you can embrace them and make more money than those comfortably paying $50,000 for a beater-upper and making a whopping $5,000 in the fix-&-flip.

It’s all numbers. If you’re doing your math correctly, you walk away from any potential deal that doesn’t offer a comfortable 10% return on your investment, i.e., the purchase price. If you’re leveraged, i.e., take a loan on the property, then your cash-on-cash return will be significantly higher. It could be upwards of 100%, provided you can qualify for the loan. The numbers here are that it was a probate property put under contract by a friend of mine, not for the asking price of $235,000, but for $190,000. I then paid him $9,000 for the contract. Comparable sales for similar houses selling in the neighborhood that are in good shape are around $265,000. It will take around $20,000 to make the house pretty. Do the math. Depending on how the spring market takes off in Sacramento, I’ll do anywhere from $20,000 (10% return) to $40,000 if everything goes wonderfully.

My brother, Dave, is handling the rehab details. I won’t generally touch general contractors. First off, you pay 20% of the total of the subs right on the top, as a given, but in my experience, they hide stuff and they don’t manage a project as your own project manager would. We’re going direct to all the trades.

I’ll post some before and afters once we get it done and back on the market. Should be about a month or two. Since the extra work the windows will require just wiped out my landscaping budget, we’ve got to get it on the market while the grass is still green.