You Don’t Have To Be Right

So perhaps it’s just a bit ironic that I would post something about doing well in the market last Thursday, just before Friday’s fairly significant selloff. More ironic still is that the stock I chose to use for illustrative purposes, Google (GOOG), took a significant dump to close down over 39 points on Friday.

Well, I didn’t lose a penny. In fact, on Friday, four of my option positions on the SPX expired worthless, just like I wanted. Why do I want that? Because when I opened those positions (spreads), I did so at credit, i.e., my sold position was worth more than the position I bought as a hedge. Today, I opened several more positions, all at a credit (meaning, I get money instead of pay money when I trade), and all-in-all, since just before the beginning of trading Friday, my account equity has increased right around 9%.

I’m bragging, right? OK, listen, I will guarantee you that there are thousands of people out there buying individual stocks and options who just gave the market a bunch of money, and in many cases, money they could not afford to lose. Hell, even very experienced and successful full-time traders. I watched emails hitting about Google in the late morning and early afternoon. There was a lot of money lost. There are equally thousands of people who hold stocks long, or they hold mutual funds, and Friday was just a bump in the road. What’s the difference between all of us?

In the case of the buy-and-hold investors, they have simply decided to invest in the market, and unless they’re dumb or have fallen for awful advice, they should do about 10% per year over the long haul, just like the market does. They aren’t making decisions based on market analysis, they are not taking significant risk, and they have reasonable returns to show for that. In the case of the day and swing traders trading individual stocks and options, a whole lot of them have made the decision to trade in a style that requires them to be right most of the time. Moreover, they have to be right about a lot of different things, and they have to be right at the right time. And then they have to incur significant risk. If they’re right, tremendous gains, but if they are wrong, loses just the same.

And you know how the market works: it takes the stairs up and the elevator down.

The difference between all of them and me, and those who trade like me, is that we’ve admitted that we’re usually not going to be right about what the market or any particular stock is going to do, but we want to make excellent and consistent returns nonetheless (5-10% per month and more), and we don’t want to spend a lot of time analyzing or watching the market every day (especially true when you live on the west coast and trading begins at 6:30 a.m).

When I used to buy a stock or option, it had to go up to make money. If it stayed the same, I not only wasted my time, but my money was useless and I was paying for sales commissions. If it went down, then I lost all the time, the cost of commissions, and I lost capital. 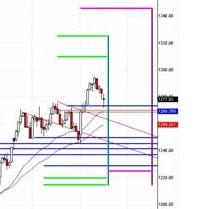 So I’ve quit doing that. I’ve decided that now, when I trade, I shall make money whether the market goes up, whether it goes down, or whether it goes sideways. How convenient for me, heh?

Well, there are some limitations, of course, so let’s illustrate. The chart on the right is just a little piece of the S&P 500 index, the SPX. Do you see the horizontal green lines? Those are some of my sold positions for January. When I sold each one of those, right around the end of December, I received money (usually about $0.6 or $0.7 per share, and I usually contract for 1000 shares). They expired last Friday morning at the opening price of the SPX. To bottom-line it, so long as the Friday opening price of the index does not cross either above or below those horrizontal green lines, the options expire worthless and my return is whatever I received when I sold them. That vertical green line represents expiration day, so you can see how perfectly that trading range was executed. For February, the first positions are represented by the horizontal red, with February’s expiration being the vertical red. I added quite a lot of Feb. positions this morning that aren’t represented here.

Now, how right did I have to be to make money in January? Not very, huh? In fact, the one time I tried to be right got me into trouble. But here’s the beauty of the whole thing. I got enticed by a larger credit of $1 per share on a spread closer to where the index is actually trading than we would normally do, i.e., there’s a more than reasonable chance that the index could rise to the level of my strike price where I could incur a substantial loss. Well, I decided I could be right, and before I knew it, was wrong, and the index was all the way up into my position and over. I was looking at a potential loss of $7,000.

But since it would be silly to lose money (Warren Buffett Rule #1: "Never Lose Money"), and because a trade isn’t over until I say it is, I just rolled that position into February positions a little farther away from the action in both strike price and time. And instead of losing $7,000, I made an additional $1,400. I still have risk and exposure, but I lessened the risk and delayed the exposure for a month, and the market paid me $1,400 to do it. Yea, it was a tough call. Trades can be defended and rolled over and over if you know what you’re doing.

The style of trading I’ve outlined here is called the Iron Condor. I learned this system from the great guys over at OptionsLinebacker.com. Go check them out, and if you’re interested, start with their short trading guide for $15. They also have a description of the system on their website. I subscribe to the daily newsletter, which is really by far the best daily information I get (and I used to get quite a lot). The first month, I just traded their same trades. Since then, I’ve done some of their trades, but I also do my own, which are usually a bit more aggressive. It brings me much higher returns, but is also riskier and requires a larger trading account and access to resources in case I have to roll and up the ante in order to protect my positions.

I’m really having a good time at this, finally. I’ll post updates.