March was reported here. April finished pretty much how I had accounted for it then, with details in the chart below. 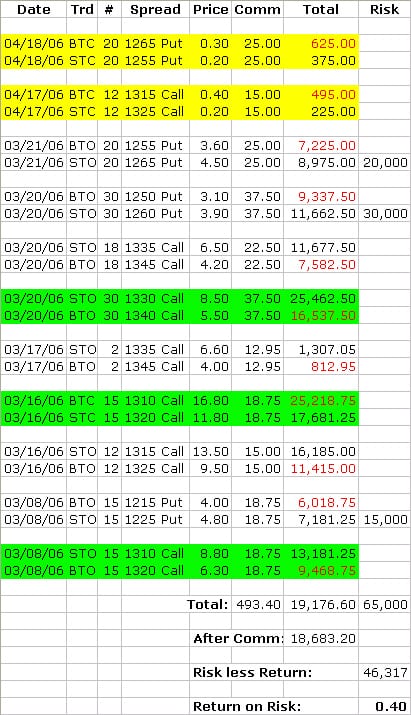 (Remember, under the "Trd" (Trade) caption, B = buy, S = sell, T = to,
O = open, and C = close. ‘#’ is for the number of contracts purchased
at 100 shares per contract. All spreads are on the SPX for April
expiration. Since you can’t lose on both your underside and topside
positions at the same time, risk is calculated on the side with the
greatest exposure.)

The green shaded trades represent one complete series in a single month. In past months, I’ve talked about protecting a trade by closing it down and opening a new position a month out in order to get higher premiums from time value. In this case, I was pretty certain that the 1310/1320 I entered on 3/08 was going to be in trouble, but I closed early enough (3/16) that I was able to just double my position size from 15 to 30 contracts and stay within the same month. In short, that series profited about $5,000 if you add up the black numbers and subtract the red ones.

The SPX finished up for the month (4/20) at 1311.46. Indeed, at first glance, keeping that 1310/1320 would have put me in the money at expiration, costing about $2,250 in settlement cost (15 contracts). But–and this is a little advanced for the purpose of this report–that’s not what happened. The SPX, somewhat unique, doesn’t settle at the closing price of the 3rd Thursday of the month. That’s when trading stops for that month of options. It settles on Friday morning’s opening price. In this case, it gaped up and settled at 1320.70, so keeping that 1310/1320 would have cost the full risk of $15,000. Be careful out there.

Also, in previous months I’ve talked about an aggressive trade I made in January that I rolled to February, then to March, then to April. It’s represented by the 12 contracts of 1315/1325 opened 3/08. A few days before settlement, the SPX took a dive and I decided to exit that trade on 4/17 for a debit of only $270. I took a $1,000 profit in a troubled trade in January and kept driving it all the way to April, eventually finishing with a $3,000 profit on that series. Never give up. In this style of trading, it’s not over until you say it’s over. …And good thing I closed it, too, because I just might have let it ride seeing that it was 4 points out of the money on Thursday, the last day of trading. However, I’d have been very disappointed on Friday when the settlement figure was released. That would have hit me for a settlement cost of $6,800, turning my $3,000 profit into a $3,000 loss.

I also closed down a 1255/1265 Put the day before expiration. This ended up being unnecessary, but I’ve been expecting a serious correction for about a month now.

May is a bit lackluster. I haven’t looked at the figures but I may be up somewhere around $4,000 or so with not many opportunities to get any more trades filled at the premiums I want in this month. The SPX has been on a solid uptrend since November… 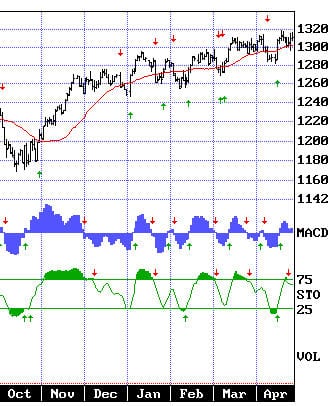 …and that has driven implied volatility way down. Options premiums are priced largely by implied volatility, i.e., the more a security jumps around, especially takes big dives often, the more the market will pay you to write and sell an option contract with any reasonable risk of going against you. The key is to have premiums high enough to be able to stake positions far enough away as to give you an 80-90% chance of winning.

So, we’re getting paid less for doing the same thing, waiting for the market to make another big correction so we can still hold relatively safe positions but get paid better for them.

People tell me that they have a hard time following all this, month-to-month. I understand. It’s like me telling you how to play a guitar, or something. All I can say is that less than a year ago, I’d have not understood any of this. If you want to learn, go visit my good friends at OptionsLinebacker. For very little time and money, you can put yourself on track to do this month in and month out for the rest of your life.

One additional note. OptionsLinebacker too publishes their actual monthly results–unlike many newsletters that tell you only about their winning trades. I can vouch, folks. These are each and every trade covered in the newsletter and I’ve been there for the blow-by-blow since last October. Yes, these returns are more modest than my own (and, I suspect, more modest than those of the newsletter publishers in the trades they don’t cover in the newsletter). However, as I told them the other day: you can’t cover the aggressive stuff I do in a newsletter. It’s too dynamic and people will just get themselves in trouble and lose big. You’ve got to know what you’re doing and do it on your own–without help and guidance. With their help and guidance, however, you can learn to trade very safely and conservatively and still turn in annual gains better than 30%. What you do beyond that is up to you.