Yea, I’m going against my oath not to blog political stuff until my Eurotrek reflections and photos are done. So shoot me.

Anyway, who said this?

"At this point, I rationally chose to abandon the Leftist philosophy of
my youth, because it no longer adequately explained how the world
really worked. With my Leftist interpretation of the world now
shattered, I looked around for alternative explanations for making
sense of the world.

"I stumbled into reading Milton Friedman, Friedrich Hayek, Ludwig
von Mises, Ayn Rand—I read all of them. I said to myself, "Wow, this
all makes sense. This is how the world really works. This is
incredible." Then I became Laissez Faire Books best customer for the
next five years. I think I read every book in their catalog. If any of
you in the audience have written books, I have probably read them."

Would you believe John Mackey, founder and CEO of Whole Foods Market? Read the whole thing.

One less idiot is always a good thing. Come to think of it, while in Europe, I became quite fond and accustomed to the "Euro-breakfasts" served in all the hotels. Pastries, bread, cold cuts, fruit, cereal, yogurts. Stuff like that. I settled in on a small bowl of the good quality granola (with dried fruit and nuts), milk, and a couple of hard-boiled eggs. Stayed with me, and no heartburn, of which I have been a chronic sufferer most of my life. That’s sumthin’, because I’m as hardcore of a bacon-&-eggs-over-easy guy as you’ll ever meet.

But maybe I’ll stop in at Whole Foods tonight, for some granola.

Update: I must confess that I’d only read a portion of the entire (long) speech before I posted the above. Having now proceeded through about a third of it, I’m going to have a lot more to say. There’s a lot to this that resonates in me in ways I’m still trying to work out. Chalk it up to owning and running a business myself, which many libertarians have not had the opportunity of. Definitely more to come. Perhaps a lot more.

It’s a wrap. Got back yesterday to SFO about 12:30 a.m. Home by about 2 a.m. We had been informed by phone and email that it was 100 deg. F in our condo. I’d left the A/C on, set to 82, so that means my intermittent A/C issues aren’t resolved in spite of several things I’ve done.

Dave, my super-brother, was good enough to head over to the condo about 6 p.m. to follow a couple of simple trouble-shooting steps and he got the A/C going. Later that night he drove the 50 miles up to SFO to pick us up and get us back home. By that time, six or seven hours later, it was down to 80. Combined with the fan, good enough for sleeping.

Ironically, we’d had lots of A/C issues along the way in Europe. More on that later.

Alright, the plan is that I want to spend some time filling in the blanks for the trip, offering up some commentary on Europe — the culture and the politics — and upload and annotate all the photos. This is a fair-size project and the deal I’ve made with myself is to abstain from political blogging until it’s done. It’s worth doing, I think, so I’m doing it.

In the meantime, here’s an email I wrote this morning at around 4:30 a.m. (still getting the internal clock adjusted) to a friend of mine in the Canary Islands who’s headed over to Barcelona and Andorra in the next few days.

OK, here’s the deal, if you haven’t left yet.

As you know, we came over the mountains from France, through Andorra. The ski resort at the very top was quite something. We only drove through, stopping now and then for photos, but here are the few things I remarked the most:

1. Once you cross over the mountain, it is virtually one gigantic city from top to bottom.

3. Tons and tons of construction cranes. I have never seen so many cranes is such a concentrated place.

OK, we pretty much drove straight through from Andorra to Barcelona and I really saw nothing that motivated me to stop. Then again, I just wanted to get to Barcelona and get a hotel. So, we get there and I took a route that brought me in to the very northern edge. I wanted to get to water, figuring that if we hugged the coast, we’d find someplace we wanted to stay. But this was a very industrial, very dismal area. It was hot; late afternoon. We found the water and started tracking south. Just as we got to that big building that’s kind of a large phallic symbol, we gave up, and headed north along the coast.

Went pretty far with it being industrial. Finally, at Mataro, hotels and restaurants started popping up and we got the first thing, as it was getting late. As usual, they had one expensive room left :) (a consistent theme).

The next morning we drove the auto-route into Barcelona and discovered we’d given up just before getting to the nice areas (like: less than a kilometer). So, we had lunch and sangria in Las Ramblas and such (obligatory, I suppose) and visited the amazing Sagrada Familia, which you must see. Then we auto-routed it back NE to Mateo and hopped back down to the coastal road. Costa Brava. Loved every inch of it. Do yourself a favor, and if you haven’t downloaded Google Earth, yet, do so and scan that coastline.

In fact, that, and Cinque Terre in Italy, were the absolute highlights of the trip. In fact, I’ve actually begun research into eventually either buying or building a villa in one of the two places, but I’m a bit partial to Costa Brava. I found that I just loved the fun-loving culture there. Even in the height of tourism (mostly Spanish tourists), they find a way to make it seem like not a big, hurried, jam-packed mess.

It was just on the northern edge of Sant Feliu de Guixols that we just happened to see a road going down from the main road to the beach and it had a couple of hotel signs. What the hell. The fist one had no rooms, then, the second: one (expensive) room left. We were in Sant Pol, we stayed two days, and it’s really the highlight of the trip. There are 5 or 6 good restaurants, and you don’t go eat ’til about 10 pm, and the band on the beach then starts at about 11:30 (people are still going into the restaurants up to midnight). Very energetic and fun. It’s families with children eating and dancing on the beach ’til very wee hours. Very uplifting. Lovely, in every respect.

After the two days there, we headed NE and stopped that night in Cadaques. By now it’s getting more desert-coastal. Beautiful, and particularly so because you can see more. Cadaques was wonderful. It’s one of those tiny little crescent-shaped ports with hotels and restaurants. It was lively, but not near overly so. Just the right amount so it feels festive without feeling like an assault.

As you go further northeast, the more touristy it gets, by which I mean not the Spanish themselves, but other Europeans, particularly French.

By the way, if you ever get over to Italy, get over to Cinque Terre. We stayed three nights in a wonderful hotel in Monterosso. Hotel 5 Terre, I believe. The proprietor and part-owner has been there 35 years and made our stay absolutely unforgettable. This was three days of mostly laying in the sun — though I did have to spend one late afternoon in the Internet café rolling some of my positions in the face of options expiration week.

Anyway, have a great trip and let me know how it went.

First time ever in all my travels going back over 20 years. We’ve been bumped and are sitting in wait at Charles de Gaulle, our non-stop to San Francisco having departed. Instead of arriving back on the west coast at noon on Monday, it’s now another 5 hours until we leave Paris, on to Washington-Dulles, two-hour layover, and then on to San Fran — arriving about 12 hours later, at midnight. What fun.

The upside is that they’ve given us a travel voucher for 1,600 Euros, which works out to about $2,000 worth of travel on Air France or KLM. So, perhaps a Christmas-time trip to Papeete, Tahiti, is in order. Alternatively, we can take 1,200 Euros in cash, about $1,500. That’s what I paid for these tickets in the first place, so for 12 hours of inconvenience, I’m not too unhappy. Besides, overbooking is all part of the deal and you know (or should) going in.

Off to lunch on Air France. Then perhaps I’ll have some time to post some travel experience updates. On y va. 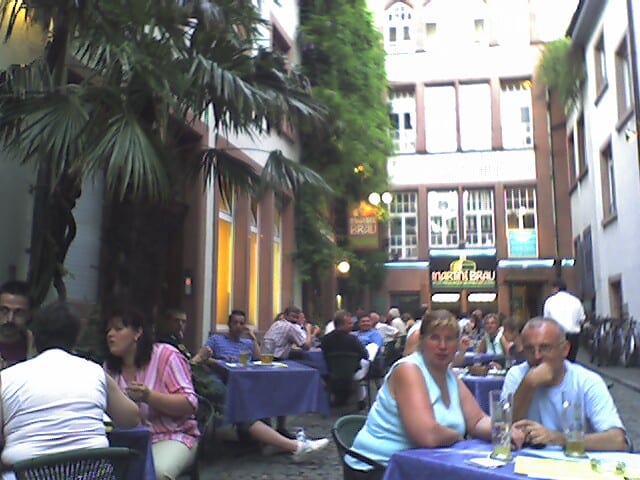 Waiting for my order of 3 (Not one. Not two.) varieties of bratwurst with sauerkraut and fried potatoes. Yumm.

We’re at Martin’s Brau in Freiburg. 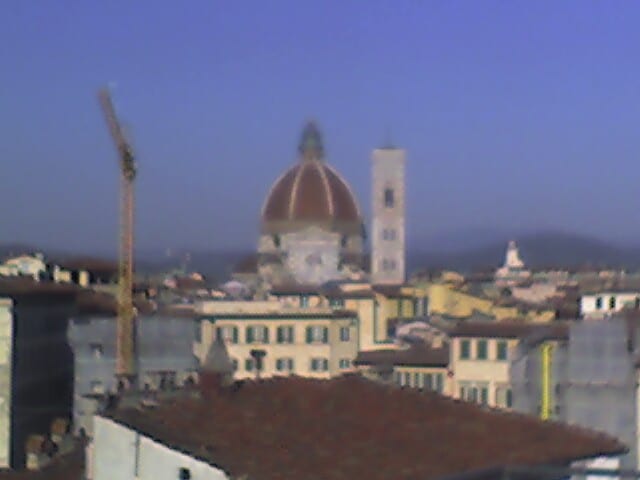 Great view of Brunelleschi’s Dome from the rooftop bar (where to look for me) of the hotel.