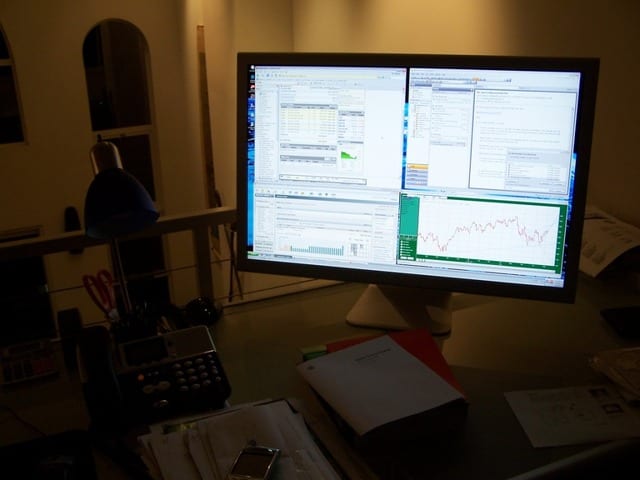 What you can’t see is the absolute carnage all around, which I’ll get to the reason for a bit later. See, I’d been toying with the idea of getting another display or two at home, where I now do a lot of my work (especially trading, in the morning hours). I’ve become accustomed to the three-display setup at the office. So, first thing Saturday morning, I announced to Bea that I was headed out to shop. The problem is that our loft is kinda artsy-fartsy, you see, and just any ‘ol thing simply isn’t gonna do it. Style — for style’s sake — is called for. And there just isn’t any locally off-shelf, multiple-display configuration that cuts it. There’s this option, of course, but I kind of like to see and feel and such before I buy something like that.

Down at the local Fry’s Electronics there was a very nice Samsung 24" coming in around 1600xSumthin’, but there was no way you were going to get anything more than two decent-sized windows on it, and I need three to four at one time. I could get two of them, but then I’m at $3,200 for the set, and then I’ve got two displays, i.e., two of everything — power, video cable, etc.

Then I take a look at the Apple 30" Cinema HD Display. Because of the single cord that comes into the back of the thing, I’d always, at a glance, assumed it was one of their typically proprietary things that can only be used on certain Macs — let alone any PCs. But this time I looked closer; and I was immediately able to tell that the connection into the computer was just standard DVI — which I already have on my Sony Vaio Digital Studio. The power is actually spliced into the single cord — along with a USB and Firewire connection that provides a hub for both so you can plug cameras, iPods, Mp3 players and such right into the display.

Hey, in this case, Apple clearly has the superior, more suitable product; and I’m perfectly happy to give them the business. This does not hold for computer hardware and software, for the sorts of stuff I and — mostly — my company does, but I’d probably consider making the switch if I was working stand-alone, or had a very small office of employees without multiple enterprise-level server requirements. Their (Apple’s) stuff is pretty, and that’s just undeniable. Go into a local Apple store if there’s one near you. If you can get over the overwhelming sense that you’re amongst nothing but leftie commies with mostly stupid ideas, then you might have a good time.

So here was the shot this morning, after a bit of cleanup and organization (click it for Big). 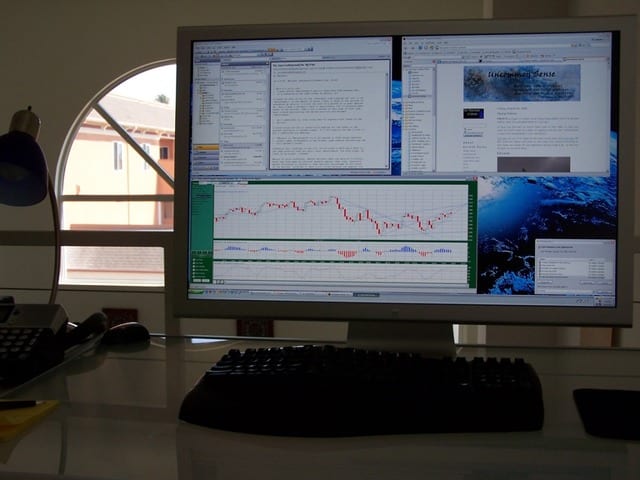 But it was quite an ordeal to get the thing working. At least in the PC-world, you have some flexibility. If you’re a Mac user, then you can’t use this display unless you have "a Power Mac G5, a 17-inch PowerBook G4, or the 1.67 GHz 15-inch PowerBook G4, so long as it has the optional 128MB graphic memory and dual-link DVI functionality."

In the PC world, just about every machine sold in the last five years can easily accommodate this display by upgrading the video card to any of about a dozen models designed primarily for 3-D HD gaming and such.

But I did have quite an experience, nonetheless. First, I didn’t pay attention to the bus interface. I needed AGP; but I got PCIx. Went back to the store to get the right board, came back, and then realized it needed auxiliary power in addition to the power supplied through the bus. I had a spare 4-pronger in the box, but it wouldn’t reach, so I had to go back for an extension. Back to the store. By this time, it’s after 7 p.m., and I’m an hour late to join Bea at her parent’s house for an informal dinner and family get-together. I get it all put together and… whoa, the OS can’t find the boot sector on the hard drive. This is serious, and it’s something that hasn’t happened to me in years and years. Back to the computer store — nunber three — to get an actual copy of XP, as the "recovery" shit that ships with manufacturers is worthless for troubleshooting. By now, dinner is off. I’ve problems to attend, and there will be no sleep — and no stopping — until I can compute again.

Long story short: looks like the drive is toast. Man, that hasn’t happened to me in over 10 years. That machine was getting on, at about four years old. The drive was probably getting ready to go and all the jostling around to swap hardware sent it over the edge. But thanks to Connected Online Backup, all the critical stuff was safe. It looks like the machine I bought my wife a bit over a year ago now has new duties. It took about 15 minutes to re-establish my backup account and download all my critical data safe & sound and current. Mostly financial stuff. Whew!

So then I popped open "the wife’s" HP, swapped out the video card, tapped power from an unused removable-drive bay, booted up, installed video drivers, and got this 30-inch baby fired up. All in all, a very satisfying day. I take the drive crash in stride. I may have lost some photos if we ultimately can’t recover them, but on balance, I live with the trade-off. At the end of many days, backing up anything but the essential and critical is just a big pain in the ass. Preserving a few photos that I hadn’t had time to upload to the net yet isn’t worth the hassle and expense of backing up everything all the time. And, anyway, all the Euro-photos are still on my notebook.

…Quick check… Yep, they’re there. While I have it open, let’s take another pic so I can address something else. 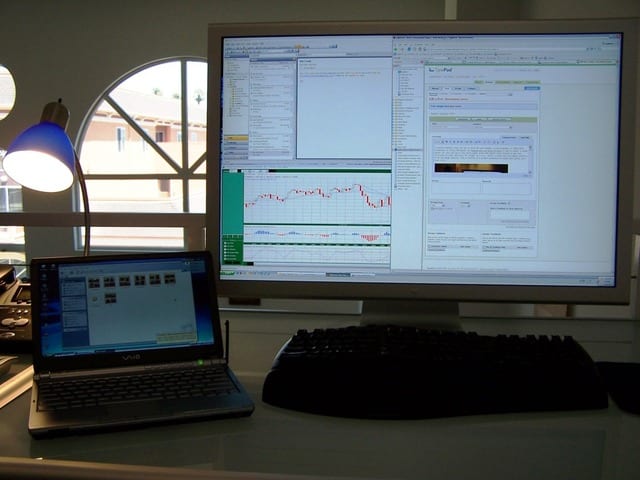 That’s the notebook that weighs in at 3 lbs., has a 6-hour battery life, and in addition to excellent WiFi reception and transmission (it can really sort out a signal when the WiFi on my wife’s iBook, for instance, can’t even get a single bar), it’s got built-in GPRS/EDGE, so I can be connected almost everywhere that’s anywhere when there’s no hot spot to be found.

Look at that photo; what is the essential attribute? I’ll tell you: minimum-compromise suitability. When you’re mobile, you need something only big enough to get a job done reasonably well. This machine is ideal because it’s so convenient that it goes with me everywhere, and I actually use it. Just recently, I realized that I had forgotten to turn on some pay-per-click advertising campaigns after a weekend pause. I stopped along the road, fired up, and had the job done in a few minutes. That salvaged what would have been a significant loss of opportunity and the consequent revenue.

But when I’m at my desk working, not going anywhere, then I need something as large as I can possibly get within practical limitations, because those seconds spent switching back-&-forth between overlapping applications adds up to days, weeks, and eventually months worth of productive time.

You know, people will spend maybe $1,500 to $2,000 on a good machine, and perhaps another few hundred for software and other peripherals, and then skimp on the display. You know what? I’d rather have a $600-special and put the real money into the primary machine-human interface, i.e., the display, so that I can make the most out of the time I spend computing.

And I spent a lot of time computing.