Here’s a chart of the S&P 500 over the last three years. Contrary to what CNBC would have you believe, it’s the S&P that’s the real gage of the market as a whole, not the Dow. Hell, even the NASDAQ is a far better gage than the Dow. (Click the chart for the large version.) 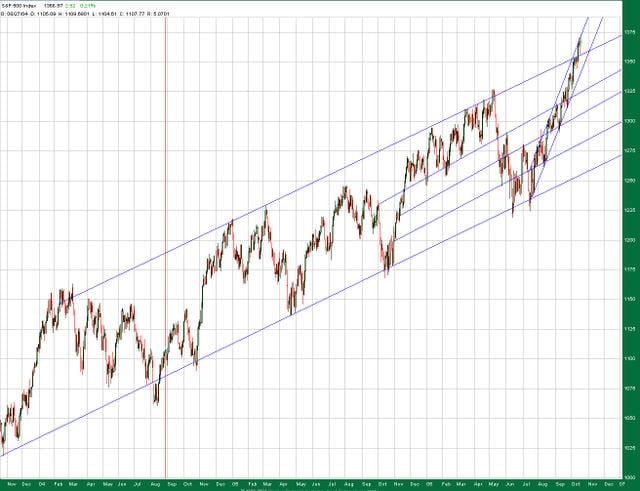 Incidentally, at around 1365 currently, the S&P is still quite far from it’s all-time intra-day high of 1552.87, reached on March 1, 2000. It’s not way off; a 14% gain from here will get it there. But where is the smart money, even though smarts sometimes prove wrong? Notice how the chart has tracked along a 100-pt wide channel pretty generally for the last three years. It’s running at a slope of around 10% gain per year. Average. We’re in the midst of a pretty serious housing correction and the economy is clearly slowing. Where’s the smart money?

And, oh, here’s the NASDAQ Composite over the last 10 years (click it for large). It has not even recovered to within 50% of it’s all-time high. Now, of course, the NASDAQ was most representative of the Internet bubble. But does this paint a picture of Tulip Mania, or what? Sure, smart money was in that rally well into 1999, but then it became so obvious that it was nearing an end. But instead, you got this, in late 1999. 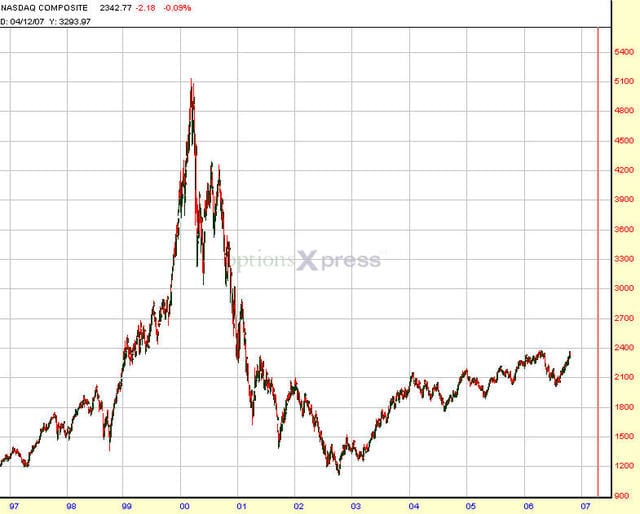 Don’t be a sucker this time. With the housing market shutting dow for a few years, fund managers are just licking their chops to get hold of all that cash that’s not going to be going into real estate.

Then again, I could be wrong and you could miss out on a great rally. As for me, I’m staying neutral and trading the swings: up, down, or sideways.