The IT manager at my company, who also just happens to be my brother, is testing out a new phone. It’s Samsung’s  new Blackjack, offered through Cingular, our wireless provider. 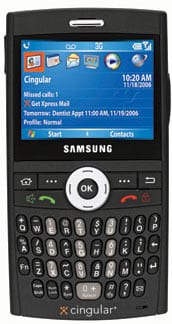 We’ve been using the Palm Treo 650s for better than two years now, which we’ve loved. This is about the same size, length and breadth, but about half as thin and half the weight. This was after trying a couple of different Pocket PC phones, from HP and Siemens, both of which sucked — the HP taking the prize for bad. The Treo has been great though, and with Good Technologies (which also works with the Blackjack) you get wireless, background, transparent synchronization of all email, contacts, calendar, tasks, and notes. That means: whatever I do in the Outlook client on my machine at the office, my machine at home, my machine at the cabin, my notebook, or my phone is automatically synchronized with every other machine. Couldn’t live without it.

The screen resolution is fantastic. Good enough for video. It also has the thinned-down version of the MS mobile OS. This is good. Look: it’s not a damn PC; it’s a phone. It’s a communication device. I need good phone comms and I need good data comms for email, calendar, web browsing, and such. I don’t need to edit Word documents or kill myself trying to view an Excel spreadsheet on a 2×2 screen, for Christ’s sake.

It’s also a 3G device, which is the next step in bandwidth. And it has the drivers built in so you can USB it into your notebook in a flash as a wireless data modem. In the tests my brother did this morning at a speed site, he got about 600 kbps down, and 200 up.  Double that, and you’ve just made obsolete DSL and Cable for most home users.

But anyway, check this out: 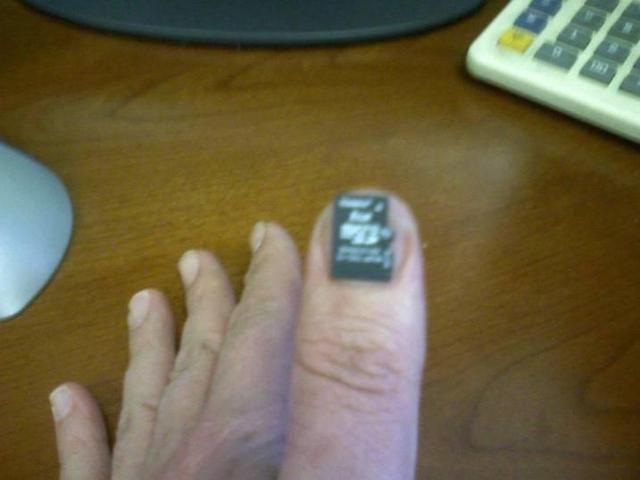 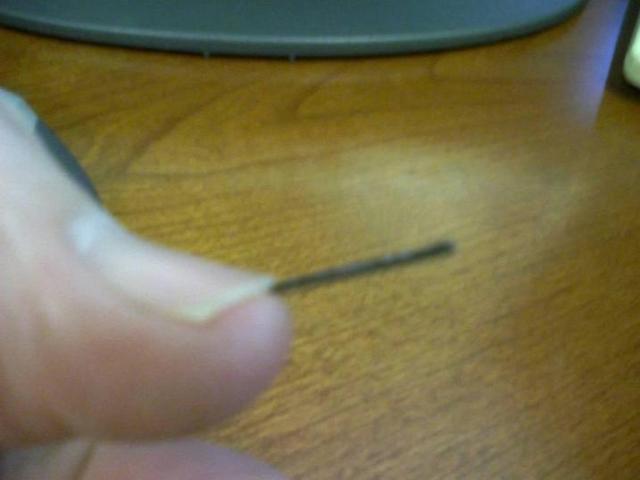 That’s the simm card for this phone. Literally the size and thickness of a thumbnail. It’s a gig. One Gigabyte. One Thousand Megabytes. Cost: $40.

I immediately recalled my first real computer; an x386 machine that I purchased in 1991 and had it shipped to me in France via the U.S. Consulate in Marseilles. It came with one megabyte of memory, expandable to eight megabytes, which, by the time I was using it for business in 1993, I had finally scrapped together the hundreds of dollars needed to get it to the full eight —  in slots measuring about 6 inches by 4 inches. Hell, the first Pentium One machine I bought in 1994 only came with 16 megabytes, and as I recall, memory was about $200 per megabyte at that time. Plus, you’ve seen the memory banks on PCs, how big they are (yes, they also have much higher access speeds, so no need to tell me that).

Hopefully, memory will become cheap enough and fast enough that we can get rid of hard-disk drives eventually.