It’s been a while since I’ve sat down and read a book in essentially a single sitting — excepting, of course, the brewing and drinking of coffee and its consequences.

Letter to a Christian Nation, by Sam Harris, really is an excellent little book that ought to be passed out to every Christian you know and care about. It’s 90 pages. Two hours, max. 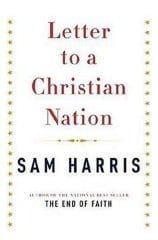 "Thousands of people have written to tell me that I am wrong not to believe in God. The most hostile of these communications have come from Christians. This is ironic, as Christians generally imagine that no faith imparts the virtues of love and forgiveness more effectively than their own. The truth is that many who claim to be transformed by Christ’s love are deeply, even murderously, intolerant of criticism. While we may want to ascribe this to human nature, it is clear that such hatred draws considerable support from the Bible. How do I know this? The most disturbed of my correspondents always cite chapter and verse."

I have spent quite a lot of time over the past few weeks and days familiarizing myself with the work of Richard Dawkins and Sam Harris. Some of that I’ve posted here in the form of videos and such. What’s becoming clear is that non-belief, or atheism, if you will, is beginning to have a forum for discussion here in America. There’s a whole lot of ways that can go, so it will be interesting. Over the past month or so I’ve heard both Sam Harris and Richard Dawkins interviewed on local talk shows, and I’ve also recently heard both numerous times on NPR.

I have become persuaded of at least one thing that is in direct contradiction to what I have believed for a long time. I had always reasoned that super technology was its own safeguard against mass destruction. In other words, the cultural evolution necessary to, say, gain the scientific and technological prowess to build an atomic bomb ensures that a society is rational enough to organize themselves such that wanton destruction does not take place.

But this only accounts for the first ones to come up with it. The copycats who come along later pass through no such evolution and so we are on the verge of 14th-century primitives having nukes (which, if you count Pakistan, they already do). As Sam Harris puts it:

"I don’t know how many more engineers and architects need to fly planes into our buildings before we realize that this is not merely a matter of lack of education or economic despair.

"In the year 2006, a person can have sufficient intellectual and
material resources to build a nuclear bomb and still believe that he
will get seventy-two virgins in Paradise. Western secularists,
liberals, and moderates have been very slow to understand this. The
cause of their confusion is simple: they don’t know what it is like to
really believe in God."

You all are already perfectly familiar with what it’s like to be an atheist. If you’re a Christian, consider Islam, Buddhism, Taoism, Jainism, Shintoism, Judaism, or any of the hundreds of others. You know perfectly well what atheism is, and how it’s arrived at. For most of you Christians, especially conservative, fundamentalist ones, the tenets of those other religions, faiths, or traditions seem to you as preposterous; ridiculous, laughable — and most certainly worthy of no respect whatsoever.

Welcome to my world.