The problem with the article I’m going to cite is that everyone will think it’s an article about the specific thing he wrote about. But it’s not.

This statist impulse is a knee-jerk preference for deploying
the force of the state (government) to achieve some benefit
— real or imagined, for one’s self or others — in
place of voluntary alternatives such as persuasion,
education or free choice. If people saw the options in such
stark terms, or if they realized the slippery slope
they’re on when they endorse such interventions,
support for resolving matters through force would likely
diminish. The problem is, they frequently fail to equate
intervention with force. But that is precisely what’s
involved. […] Liberty
is more often eaten away one small bite at a time than by
one big gulp.

I tried this reasoning on some friends. Here’s how some
typical attitudes were expressed:

Delusion: "It’s not really ‘force’ if a
majority of citizens support it."

Paternalism: "Force was a positive thing because it was
for your own good."

Dependency: "If government won’t do it, who
will?"

Myopia: "You’re making a mountain out of a
molehill. How can […] possibly be
a threat to liberty? If it is, it’s so minor that it
doesn’t matter."

If there’s one thing we must learn from the history of
regimes, it is that if you give them an inch they eventually
will take a mile. It’s wiser to resist liberty’s
erosion in small things than to concede and hope that bigger
battles can be avoided later.

Most or all describe, more or less, the approach to politics of just about everybody I know, democrat or republican, liberal or conservative. If, as our Christian friends tell us, mankind is naturally depraved, then everything you need to know about that depravity is contained in the above. 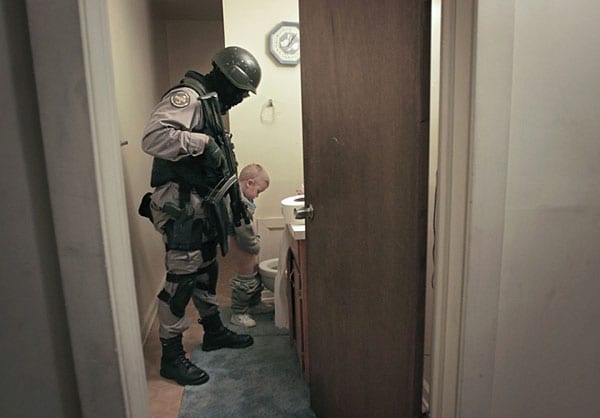 I get the last laugh every time. But that’s only because nothing every changes. The picture at the bottom of this entry didn’t change anything, and neither will that one above.

This has got to be the saddest story I’ve seen in a while. It breaks my heart to no end.

I was watching it a bit on the local and national news, last night, and thinking to myself: no chance they’re finding him alive. Sad story, especially when you consider that had he just sat tight, he’d be warm at home with his wife and two daughters this moment. And now, for all the four of them, that will never happen again for the remainder of human history.

Mistakes, even slightly to perfectly innocent ones, can be extremely costly. I don’t know where on the scale I’d put the error that caused this tragedy, but the error was a long time (a week) before James Kim set out on his doomed trek to find help for his family. But setting out, as he did? It was the only decision a man could make, in that moment. He had no idea that rescue was forthcoming, within two days. It wouldn’t have mattered if rescue had come 10 minutes after he’d set out. He knew that if they were not rescued soon, his children would freeze to death and he and his wife would follow. They had been there for a week (just imagine that) when he set out. He had no real basis to believe that a rescue would take place before it became a four-body recovery.

He had no good options. He choose the best one of the lot of awful alternatives. It might have worked out, but it didn’t, for him — or for his family, where husbands and fathers are concerned.

The error came a week earlier, when they either took a wrong turn, or attempted a "shortcut" to get over the coastal range and onto I5 in order to make their way more quickly home to San Francisco. There’s a lot of elements, but essentially, the mistake that cost him his life was to proceed on when he’s climbing, without opposing traffic, no snow clearing equipment, and no civilization. Temperature drops an average of 5 degrees per thousand feet, and being a coastal range, the air is going to be laden with moisture, which means that the precipitation (snow) will only become more severe the higher you go, will stick better to the pavement, and you can soon find yourself beyond any ability to turn back. But in a nice warm car with headlights on, the radio or iPod blaring, kids laughing in the back, it’s actually hard to come to the realization that you have just passed the point of no return and have entered a death trap.

Be careful out there.

James Kim can, should, and I can’t but suppose will be remembered as a real man who made a mistake, but then did only what such a man would do.

You head all about Michael Richards’ racist rant, did you not? But, did you see "the" video?

According to the YouTube description, and Fox News, he is:

You know what? I don’t care about his rant. Of course, as a white guy in this double-standard culture, I refrained from expressing that I didn’t care about Michael Richards, either.

I guess I’ll just keep on walkin’ on the egg shells around the brown skins. In case you think that’s a "remark," I’m married to one of them.

By all reasonable accounts, so far, it’s a decent bet that the 2008 presidential election will feature Hillary Clinton vs. John McCain.

Matt Welch has dealt John McCain a pretty scathing editorial, I think, in the LA Times. Will it make any difference? No, of course not. The only questions that get asked and answered, any more, concern themselves with degree — how much poison — a little, or a lot? But everyone is content to drink some.

Both will promise, and try, to make the government run on time like never before. The one, for the children, and the other, for the troops.