It takes a couple of minutes to get to the punchline, but it’s well worth the wait.

Quite naturally, if there was a market demand for ethanol in large quantity at the gas pumps, such would have existed for so long as such demand has existed. Nothing at a political level would have had to make it so.

Now, I’m not up to speed on the various legislative and regulator mandates regarding ethanol and whatnot, but it would certainly be interesting if it turns out that our force-backed demand for corn-based ethanol is what’s got millions of Mexicans wringing hands over how they’re going to pay for their next tortilla.

Didn’t take "free-trade" Calderón long to cave, did it? Not when you have to "do something" and political futures are at stake.

On Thursday morning, Mr. Calderón, a fierce advocate of free trade in last year’s campaign, let the hammer fall. He announced that he had reached an agreement with the major businesses involved in corn products to stabilize the price of tortillas at a maximum of about 35 cents a pound.

Oh, I see. He "reached an agreement;" and so, naturally…

He also fixed the price of cornmeal sold to mom-and-pop tortilla shops at 14 cents a pound and announced that government-owned shops in rural areas would sell tortillas at the same price, far below the market rate.

And in political rhetoric made-to-order for third-world masses…

“We will not tolerate speculators and monopolists,” he said. “We are going to apply the law firmly and punish anyone who tries to take advantage of the needs of people.”

Can’t have the "needs of people" (requirements for survival?) taken advantage of, now, can we? Good thing we don’t have anything like that around here. After all, one could risk building an actual civilization with behavior like that.

A pretty-well-done BBC piece on hang-gliding, along with some decent flying clips.

In this day and age, I could just see someone putting something like this together with a dubbed soundtrack to create a humorous fiction. In this case, however, the truth is stranger.

That’s a DoobleBug harness with its Radne engine replaced with a small jet. It’s just a demonstration, and not something that will ever be for sale anytime soon. Powered hang-gliders have been conceived and produced for a while, in various configurations, but I’ve never been attracted to the idea of a prone harness like the Mosquito and others. Even though I’m quite used to flying prone (Superman) and have endured for up to nearly four hours, there’s an uncomfortable aspect to it. Of course, we fly that way only partly because it offers a unique viewing perspective; mostly it’s to greatly diminish drag. But if you’re under power, that much drag is simply not a concern, so flying upright is the way to go.

I’ve sat in that harness in a static display and it feels just right. I happen to have a large-surface-area hang-glider with a low aspect ratio that would be perfectly suited to a DoodleBug, so I’ve definitely thought about it.

Update: Ah, here’s a video of someone launching in a Mosquito harness: 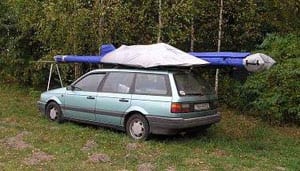 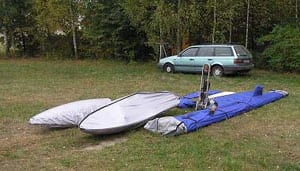 It’s the Aeros AL-12M, from the Ukranian company that’s been making excellent and very price-competitive hang-gliders for better than a decade, now.