Get your kicks. We’ll, I can’t argue that it’s the same as murdering a human being.

On the other hand, what it is is the destruction of a highly prized value; a value that someone has pursued, acquired, nurtured, loved, admired, enjoyed, and reflected upon countless times.

We don’t have kids. We have dogs, and I’d not presume in a million years to assert to someone that our dogs are on any level commensurate with their children. Still, such logic doesn’t begin to penetrate the wall of loss and rage I would personally feel if my values were dealt with in such a cavalier manner — just so that someone of G.I. fashion can get their jollies.

Fuck them all to hell. My hate and loathing for such "people" — every single one — knows no bounds.

If you can get through the maze of this post by Balko, here’s really the only thing that comes close to the point.

Medved is also misguided in
stating that for one to subscribe to natural rights theory, one must
believe those rights are conferred by a deity.  Kant most famously
arrived at natural rights theory without acknowledging a creator.  But
even Locke, while not a deist, showed that one could arrive at natural
rights through reason, not religious faith in the idea that innate
rights have to come from a divinity.

It’s simple. Really. You choose your own values, right? Stop and think about it. Right? Do you perceive that capacity in other people? You do, right? Well, if you do, and they do, then it’s a natural attribute of the human condition, right? Note emphasis on natural.

That’s all there is to it. Really. The fact that you can’t tread on others and they can’t tread on you in pursuing your all’s various values is simply a logical consequence of non-contradiction.

It seemed a bit uncharacteristic of him, so one morning when I opened my email to find this, I thought it might be in my interest to pay attention. So I did; and it was. 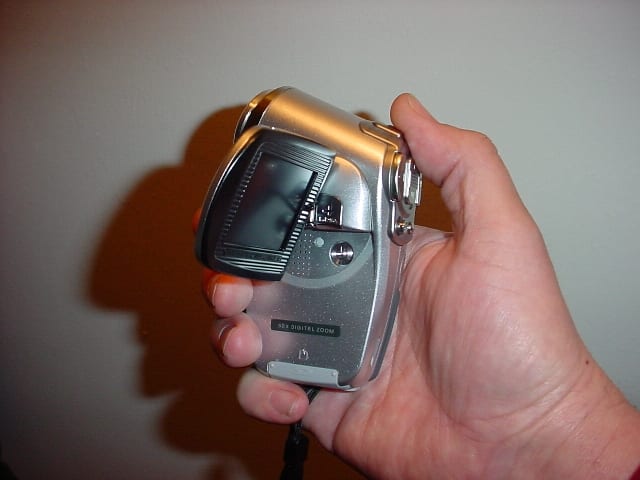 You can see how nicely it fits in one hand, and all operation is with the thumb. Here’s the Sanyo Digital Movie C40 roundup & specs. To sum it up, though, this shoots amazing 640×480 video at 30 frames per second. Still images are 4-5 mega-pixel, and it has 6x optical zoom. Best of all, no tape, no mini-DVD, and no HDD. It used an SD memory card; 2 gigs goes for about 40 bucks, and I believe they have 4 gig cards now. At max quality, it’ll shoot better than an hour of video. Cool feature: it will shoot beautiful, hi-res stills while shooting video. Just press the button. Here’s a photo taken this morning, using the built-in flash. 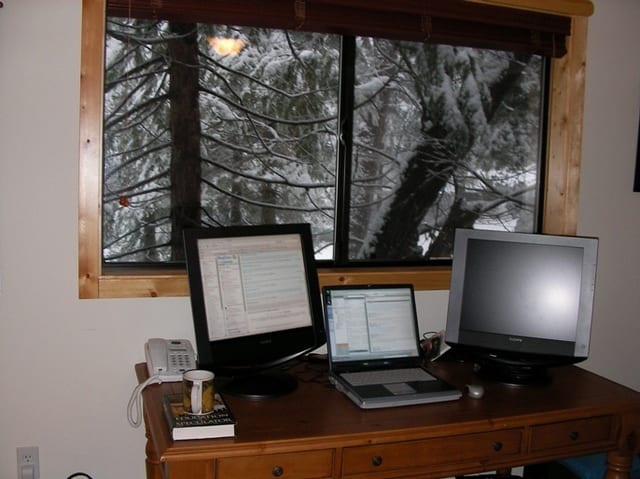 Here’s a video I uploaded to YouTube this morning, documenting our arrival in Arnold, CA, our second home, after a 500-mile, 8-hr-on-the-button (calculate my average speed) trip from the San Diego area yesterday. Now, the first thing I notice about that video is that the quality is way turned down from what I shot. I’d love to show it to you here, but it’s an 86 Meg file, and that would eat up just too much storage.

But here’s a short one that’s only 21 Megs of the snow falling this morning, outside the front door of the cabin. If your system doesn’t pick up the .mp4 extension type, it’s Quicktime that’ll play it in this native form (it comes off the camera like this — no pain-in-the-ass capture and convert required). Now, to get an idea of the quality difference, here’s the same thing after getting YouTubed.

More stuff to come, and when I get home, I’ll snap a picture of the Sony Camcorder and the Kodac still camera that this is replacing.

Since the fire and strife of New Year’s day and since, we’ve been concerned not only about Dave & Nancy, but about their dogs. Especially Ruby, our Rotor‘s only offspring. There’s a small "issue" with Ruby’s stance, so Nancy decided she would not be shown or bred, and decided to find a good home. Very picky, these pros.

Bea & I went to the Horseman’s Association fund-raiser for Dave & Nancy the other night. I came prepared to write a check for Ruby in an amount substantially more than the actual price she was asking, and then we would be sure of finding a nice home — especially one close to ours. But Nancy had already found someone, just over in Santa Cruz, and everything sounded good. That I was offering double the price had not the slightest thing to do with anything. First, Nancy had already made a deal, and second, she knew she had found a good home and was very comfortable about it. Well, I wrote the check anyway, talked Nancy into taking it for their general needs, and we carried on.

I’m starting to think "how
many more people have to die" is the wrong question. I fear that
pondering how many of these deaths it will take to spur people into
seeing the perversity of our drug laws and their enforcement, and
demanding reform is the wrong way to look at it. I’m starting to think
that we’re now moving in the other direction — that these stories
fatigue people. Numb them. Each one gets a bit less outrageous than the
one before.

Radley’s right, of course. Still, I don’t know how to keep from wondering. It’s a simple recognition of a manifest fact: a lot more innocent people are going to be murdered by their government in the "War on Drugs."

And then one day, it’ll stop, but only to be replaced by the next "social crisis" that’s used to justify kicking down people’s doors while they sleep, and murdering those who don’t take that invasion in the precisely "correct manner" in the eyes of the marauders.

Once again, it will all be conducted under the veil of "unfortunate tragedies," "complete investigations" ("can’t comment: investigation, dontchaknow"), the very occasional prosecution and hand-slapping of the most egregious, and admonitions that it’s the "sad price we pay" for maintaining social order.

You know the story: to make the omelet (of civil order), you’ve got to break a few eggs (murder a few innocents).

The "War on Drugs" will end when it’s good any ready to end — maybe when enough stupid, scared, malicious AARP old fucks are dead. Or, when people no longer see drug prohibition as a "value" worth pursuing.

You know what I think the root of it is? I think there are tens of millions of "citizens" who love being citizens, and who love the idea of a sovereign authority. Nothing quite says "I love you," from State to citizen, like dead bodies. An "acceptable" number of innocents is just the unavoidable cost in pursuit of the "greater value."

The value being pursued –acted for — by most everyone, is domination by authority. Used to be the Church, now it’s the State, and the War on Drugs and the next thing, and the next, will all just be minor acts in that overall play.

If people ever value freedom and independence in a non-contradictory way, then things will change from the bottom up. Until then, it’s all just remodeling and window dressing along the march of time.