I must say; even though my heart is with the Bears, because down moves are just plain more fun, that was a pretty damned good fake out today in most indexes. The Bulls set a tempting trap and pulled it off beautifully.

Here’s the S&P 500 Index over the last month. Each candle in a full trading day’s action. 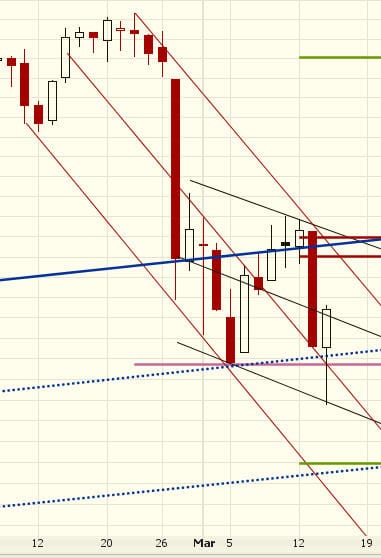 You’ll recognize that big red one from Feb 27. What a day that was. I’ve only been trading for 18 months, and only about the last year watching the market most of the time, but I had never seen prices move that quickly. To someone who’s accustomed to a scene that resembles grass growing most of the time, it was sumthin’.

So, anyway, check out today’s candle, and most particularly, check out the red candle from March 5th. See that? On 3/5, the very bottom of the trading range for the day was the close, also the low of the day, and the low so far in this correction cycle (assuming it remains merely a correction, and I have absolutely nothing to suggest it’s not). Classic Dow theory, and it’s still the best principle going: uptrends are a series of higher highs and higher lows, and downtrends are a series of lower highs and lower lows. Simple. You’d be amazed how many people don’t take heed, though.

So, everyone is watching that pink line at 1374, to see if it gets taken out, because if it does, and it holds: lower low, bolstering the case for the downtrend (since the initial big down day, we’ve essentially been moving sideways across the chart). The bottom of the white candle body was today’s open, and within a few hours we had pierced the "line in the sand" by 10 points (nearly 1%). I was half convinced. I exited a losing position, but I didn’t execute the second half of my plan which was to recycle some of my bearish trades into more aggressive bearish plays. I determined to wait for the daily close, and I’m glad I did.

Those who went short big on that break got hurt, today, and this is the sort of thing rallies are made of. Big rallies only happen because bears get squeezed, having to cover, and it sets off a chain reaction to the upside.