“Enlightenment” in the Service of the Infantile

I’ve never seen or listened to more than about three minutes of Don Imus. My impression of him is negative, which may be accurate or inaccurate according to my values, but I really don’t care enough about him, one way or the other, to find out whether I’m missing anything I’d rather not miss.

I was driving home from a grocery run and NPR had the Rutgers women’s basketball team on with their press conference and I just couldn’t help but laugh my ass off. Jesus Christ. On and on. Poor little babies. They got called names. Just look at those pathetic faces. 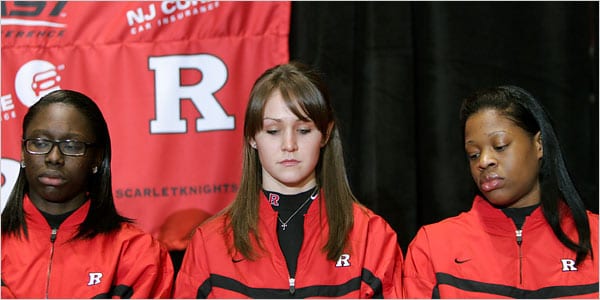 Look; I’m not adverse to the general enlightenment (which is exactly what it is: racism, bigotry, and what have you, is chiefly a symptom of ignorance). This is not enlightenment. This is the politics of victimhood and pond scum like Jesse Jackson, et al, are happy to chew these pawn-girls up in the service of their fraudulent shake-down looting — upon which they always get a pass because they’re black. Race-excused thugs: Jesse Jackson, Al Sharpton, and a lot of others.

It’s a con, just like these things always are. Keep it in mind: when you’re asked to act like a 4-year-old in order to "raise consciousness," pass. The good opportunities will come along now and then.