It is to Laugh
The Leaning Tower of Pisa 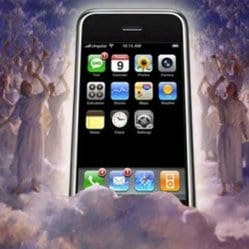 Though I certainly wasn’t on hand to witness any of the excitement over the JesusPhone, I do find it some kind of wonderful that so many can be so excited about a product. It’s important that it’s true that such a thing could only be produced by means of some significant degree of human freedom of thought, action, and disposition of capital. Something like this will never be produced in a Castro’s Cuba, a Chavalian Venezuela, anywhere in a kleptocratic Africa, or indeed in any of thousands of lesser places around the globe.

America has its problems but just about anyplace else you can think of is worse.

When I read Lew Rockwell’s thoughts on Apple’s iPhone phenomenon this morning my first thought was to wonder how many people would camp out for three days and stand in a line of a thousand people in order to cast a vote in an election. Dammed few, I’d think, and everyone ought to take a moment to reflect on that. Hell, I don’t vote at all, for reasons well documented; but even if I did I’d be hard pressed to wait as long to do so as I’d wait any day of the week for a Big Mac. So you don’t have to guess where the two reside, relative to one another, on my personal values hierarchy.