Here’s the Shanghai Composite Index over exactly the last year of action. 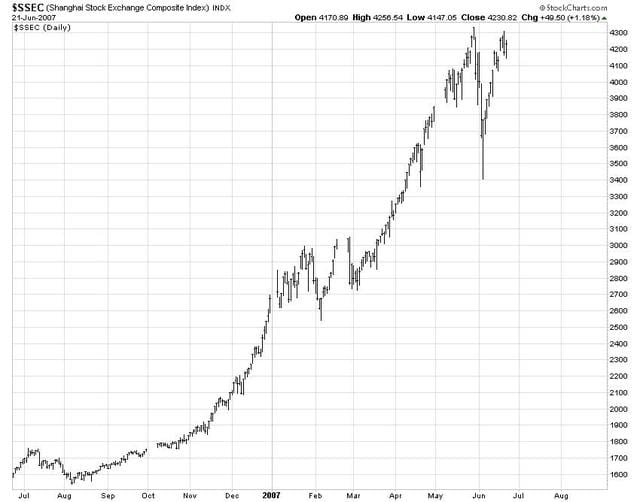 Well of course there’s going to be a contraction at some point.
Lots of people and institutions are riding on profits of 200% and
more, and at some point they’re either going to want to take them, or
the fear of being the last out the door is going to tip the balance and
there’s going to be selling (heavy distribution), which, of course, is going to be in excess of what will be
able to be absorbed. So if there aren’t enough buyers at the
prevailing prices for stocks and people still want to sell, then the
bids (prices) drop until there are sufficient buyers to take on all
sellers. (Sometimes I get the impression that people think there’s some other
sort of mechanism going on, other than a very simple market mechanism
writ humongous.)

At any rate, my speculation right now is that the pros are still
buying, which means that they need guys like Greenspan to stoke up the
fear, like earlier this month. The biggest trading mistake longer term
investors make is to fear that their gains might get wiped out so they
play it safe instead of learning how to deal with the unnatural feeling of riding a
winner for all it’s worth. Even still, that big drop in early June
would have probably been enough to shake me out of anything I was
holding. And of course, in retrospect, having sold would have given the
big boys the most stupendous entry imaginable. Wowzer!

It always pays to have an idea of what the big institutional money
is doing. If they aren’t heading for the door, chances are you’re looking
at a fake out.

So ends my head-up-my-ass report
on the irredeemable evil commie Chinese regime. Don’t even stop to
think who and how many a 170% gain in the stock market might be helping
and life changing. Pay no attention that so far this year, 8 million
stock brokerage accounts have been opened on behalf of regular Chinese
people — a record 350,000 on last May 8 alone — and the total number
of small investor accounts is topping 100 million. Do you, dear American, have a trading account at a brokerage? Are you paying attention to anything?

They’re going to catch you, you know.