No Rationing; Courtesy of a “Benevolent” State

Of course, that’s not the case. A state-run system could decide, as
Medicare does, that they’ll pay for any and all necessary procedures,
and do so quickly. Then there would be no rationing.

That was Ezra Klein, a couple of days ago.

On the same day, the Guardian reported the full extent of what happens when the State says there will be no rationing. 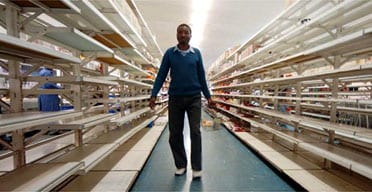 President Robert Mugabe’s order that all shop prices be cut by at least
half, and sometimes several times more, has forced stores to open to
hordes of customers waving thick blocks of near worthless money given
new value by the price cuts. The police and groups of ruling party
supporters could be seen leading the charge for a bargain.

It’s reported that Mugabe dismisses charges that this will only make things worse as "bookish economics." Yea, that definitely looks like a theory-practice dichotomy to me.

Both Bruce and Dale handled Klein and his dumb cheerleaders, if you’re interested.