Here’s how we mostly get around downtown San Jose these days. 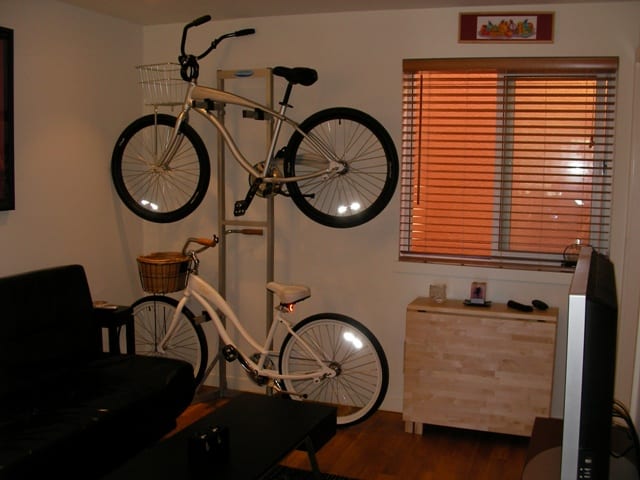 This is the entry room into our loft (you enter from the rear), which is right off the kitchen, and then through the kitchen to the main loft space. Since this is the only entry and egress, it’s not suitable as a bedroom, and when we initially moved in, we had it set up as a dining room. Only, we always ate at the bar — which is where all the pictures are taken for the food blogs I do — or the balcony. And I hated having the TV in the main space. Long story short: we turned this into a TV room with seating that’ll turn into a bed for an overnight guest in a pinch.

The bikes are your basic cruiser bikes. One gear and reverse pedal brakes. Simple. In fact, that’s what Giant call this line: "Simple." His & hers, with a rack I got from Performance Bicycle for maximum space efficiency. I had a mountain bike, but it was just too much of a pain in the ass to maintain and keep tuned, so I never used it and it took up space on the small balcony. The HOA turned a storage room into bicycle storage, but in addition to the monthly storage fee, you’ve got to go down to the garage and then back again, and that’s an inconvenience.

The basket on mine is the exact size of a paper shopping bag, so virtually all of my grocery shopping is Zanotto’s or Trader Joe’s; both, just five minutes away. Whole Foods, when open downtown next year (the lot is now cleared), will be about a 10-minute ride. I like to shop almost daily because I’m incapable of having any idea what I want to eat tomorrow, and loath the idea of locking myself into something just because I already bought it. Most of my meals are thought up only hours before preparation. And if I forget something, I can be to Zanotto’s and back on the bike in 15 minutes on the nose.

Almost everything we do downtown is now by bike, and we just love the convenience and just plain fun of it. It’s terribly fun riding back at 10 p.m., after a film, and maybe we’ll stop off at Trials on the way. Or maybe we just go to dinner. P. F. Chang’s China Bistro was done just last weekend. And Caper’s Loft Bar and Bistro is probably our most regular — often a watering hole right before showtime at Camera 12. Original Joe’s is closed for remodeling but it’s always on the list. I could go on and on.

Last evening we rode down to the new Morton’s Steakhouse that’s recently opened in San Jose. Less than 10 minutes ride, we enjoyed drinks and split their to-die-for chopped salad, a medium-rare filet, and steamed broccoli with sauce Bearnaise. Then we went and took in a film, just 3 minutes from there.

I was opining to some friends, just yesterday, that if I lived in a real big city like New York or San Francisco, I’d have to think seriously about not even owning a car. Just walk, ride the bike, take a cab or use the subway or bus. Then, rent a car when you really need one. I’ll bet you save lots of money and lots of hassle. The bikes are great because we get where we’re going quickly and we park close with no hassle or expense.

I was enamored of the Smart car while in Europe last year — Paris, in particular, where they’re as plentiful as bees. It brings to mind the saying of a friend of mine in a literal sense: "everybody gets to go to hell in their own go-cart." But seriously, for dense urban driving, I just can’t think of anything that’s a better integration of mitigating tradeoffs. Almost as easy to maneuver and park as scooters, but with protection and comfort from the elements, comfort and safety for a passenger, and room for groceries or packages from the department store. For this application: excellent; I gotta say.

I think if I lived in San Francisco, I’d get two identical ones for the wife and I, and because you can park them tandem in a single parking spot. If identical, you don’t have to do the switcheroo thing, because one is as good as the other. With those hills in SF, the bike can definitely have serious limitations.