First an email just out, which, I hadn’t written with the intent of publishing, but then right on the heels of that I saw something that just made me shake my head and follows right along from what I’m talking about. The email was to Billy Beck, following up on this entry.

First, this reminds me of a local radio talk show host, Ronn Owens, here in the SF area. He’s a "moderate" lefty, and by that I simply mean that he’ll usually come down on what would be the lefty side of some issue, but not really by means of a principled lefty ideology (collectivism). He just weighs it on whatever (to me) arbitrary standard or value and has his position. Then, the next thing that comes along, "right on schedule," he’ll go the other way (can’t "go too far," or whatever).

Nothing new there, but I bring it up because in the 15 years I’ve tuned him in, on & off, he always explicitly rejects slippery slope arguments on the explicit basis of pragmatism, which is — I think — where you seem to be going with your observation.

So, between and apart from the true commies who are
principled (collectivism), and we who are principled in individualism,
you have most people, and most people are arbitrary wandering
pragmatists; free spirits not necessarily tied down by anything and on
any given day hold positions that confirm a collectivist premise, an
individualist premise, or no principle at all, and all at the same time.

So the fallacy, in either direction, is to predict what they’re
going to do next by what they last did — by identifying the underlying
principle. You just don’t know. Otherwise, one is talking about a
"principle of pragmatism," which is rather like trying to ascribe
principles to a random number generator.

That last part is where epistemology enters the picture (the problem
of induction) and leads me to the second thing. I just finished a book,
"Fooled by Randomness," by Nassim Nicholas Taleb. You and Kyle might
care to give it a glance. I think I could best describe it as an
epistemology book (he uses the word extensively) from the perspective
of a successful options trader who has made a career out of profiting
from rare, random and unpredictable events ("Black Swans").

He tends to make fun of everybody, simply because, he argues, that
most of what we think we know as it applies to what’s likely to pass
based on what we believe has past is just based on noise and not
genuine knowledge (not on a driving principle, perhaps?). He’s not a
skeptic (he tags Hume as an "obsessive skeptic"). Just skeptical, if
that makes any sense. He calls himself a "skeptical empiricist," which
strikes me as Humeian, but he’s not skeptical about knowledge per se,
just holds it to a very high standard (he’s in the business of making
huge monetary bets on what he thinks he knows, and doesn’t know).

Anyway, it’s a very interesting approach to all of this. Perhaps
it’s time to give Hume a (cautious and guarded) second look. And
anyway, it’s an interesting read in the sense the guy is extremely well
read.

Then I came across this.

Last night I had dinner with a good friend who is a broker with one of
Wall Street’s top retail brokerage houses and he told me for the first
time in his short ten year career he’s really nervous. He said people
are usually calling freaking out by now asking to sell when this kind of news
comes along, but not this time, not a peep even from the overly nervous
nellies. Usually when there is such extreme complacency in the market,
it means we’re in for a big fall.

I don’t know if you get what I’m driving at, or not. To be sure, people are always trying to predict the future based on what they’ve seen in the past, and what they’re seeing this moment. But now that I’ve been hyper-sensitized to it (courtesy Taleb), I see it everywhere all the time; and when you begin to take note of it and have some sense about how much of it comes to pass, you just can hardly help but begin to regard about 99% of everything you see and hear as noise — random (unprincipled, arbitrary) noise.

That link, above, was posted Thursday afternoon, August 16. The dinner took place the night before, and that morning (Thursday) saw the scariest, panicky market sell off thus far in this (so-far) market correction. Coincidentally, I began this post at roughly 10 a.m., which just so happened to almost precisely coincide with the bottom, so far. If you follow these things, then you know that all the major indexes hit a roughly 10% correction from the July high and all reversed furiously at the same time. Bargain hunters, or Plunge Protection Team? I don’t know. What I do know is that Buffett, Lambert, and others — whose trades are public knowledge by SEC mandate — were buying like crazy. Was Buffett right? Time will tell, but he did post gains of about $3 billion in three days. Not a bad week at the office. 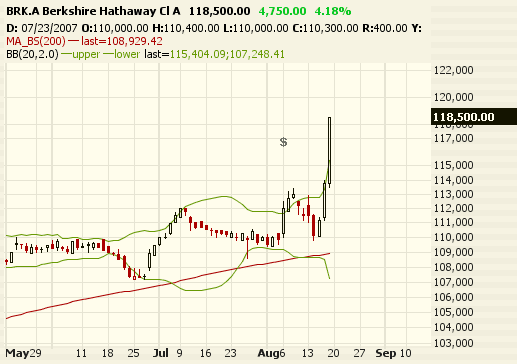 Friday was an equally furious explosion upwards. Yea, the Fed cut a largely symbolic interest rate about an hour before the market opened. So, naturally, the day ended much higher, "thanks to the Fed." Fed saved the day; yet, no one seems to point out that bargain hunters like Buffett and others were buying a couple of days earlier. No one points out the numerous times when a Fed action caused barely more than a momentary bump in the action, up and/or down, and no one mentions that markets regularly correct 5-10% and recover all on their own — or they continue down, or they go sideways for months.

For myself, I got wind that Buffett was buying the investment banks that have been hit particularly hard and so I "what the hell" went long about $2,500 in call options on Bear Stearns and an equal amount on Goldman Sachs. Friday morning I closed my Bear Stearns for a $3,000 (120%) profit. I’m showing a $1,000 profit on Goldman, so far.

Conversely, I could have been fooled by noise and randomness and done something else, like maybe stuff cash in a mattress?

This guy, much less of an alarmist than I, is
seriously considering taking a significant chunk of cash out of the
bank and putting it in a safe deposit box. While gold might be a better
play, the old hoarding dollars under the mattress strategy might not be
a bad play as well since physical paper dollars may end up fetching
some kind of premium over the digi-dollars that the world’s central
banks are injecting into the inter-bank system. Unlike the German
hyperinflation of the 1930’s there’s not going to be much physical
paper to carry around in wheelbarrows looking for food. This time it
may very well mean that paper cash ends up being king, with
digi-dollars not worth the megabytes they’re printed on.

You know what? She may be right. Out of a one-in-trillion chance, she may be right. But she has no idea, you have no idea, and I have no idea. Until confirmed otherwise, this is all just noise. Here’s what I mean. Take a look at the very last chart at the bottom of this aforementioned prior entry. In light of all the above, can you see that there is essentially one signal, and, considering the daily deafening roar of "market commentary," about several trillion bits of noise.

It sure aint easy. Life wasn’t this complex when we were evolving in the plains of Africa. Then, every bit of noise needed to be heeded in a life or death struggle. Now, you risk being fooled over and over and over because you induce a future based upon what you see and hear and have seen and heard; but what you see or have seen, while maybe knowledge of reality, cannot possibly fit into the context of the future; because the context of the future is still unknown.