Confirmation Bias
“To Protect and Serve”

Take a look at this. 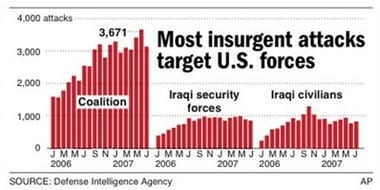 It accompanies this story Iraq debate is sea of statistics, in which the point, when not explicit, is implicitly that policymakers are confused and nobody really, really has a handle on this thing. Worse, this entry comes on the heels of the confirmation bias of that "turning tide" article I linked to just hours ago. In short, it’s far easier and more sound to look for facts that suggest you are wrong, than to seek selective points of data that "confirm" you are right. So let’s apply that in a forward-looking way, shall we?

That chart does not tell me what’s going to happen in the future; it doesn’t tell you, or anyone. But what would be your guess? Since I don’t know what the future holds, the best predictor for next month’s numbers are…this month’s numbers, so about 3,000 attacks on U.S. forces, and 1,000 each on Iraq security forces and civilians. That’s a total of 5,000 attacks. So by leaving completely and immediately, attacks might be reduced by 60%, to 2,000 total.

Of course, the void could be filled by those same attacks being directed at Iraqis. But it’s equally plausible, I would guess, that the absence of U.S. presence could see even a further reduction in attacks on Iraqis, as the insurgents will have more of a sense of the luxury of time.