Let me show you a couple of charts, both covering the last five years. The first is from a company that was trading in the mid-20s five years ago, and is now trading in the mid-30s, so it’s doing a reasonable, average, established 10% per year, on average. Gains are so modest that compounding isn’t much of a factor. 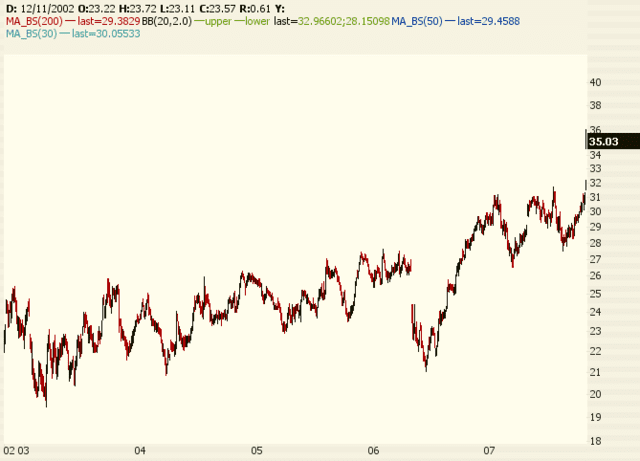 Now here’s the second company, covering the same space of time. It was trading at under $10 five years ago, and is now closing in on $200, a 2000% gain averaging a doubling (100%) of your investment year to year (compounding is a ginormous factor). 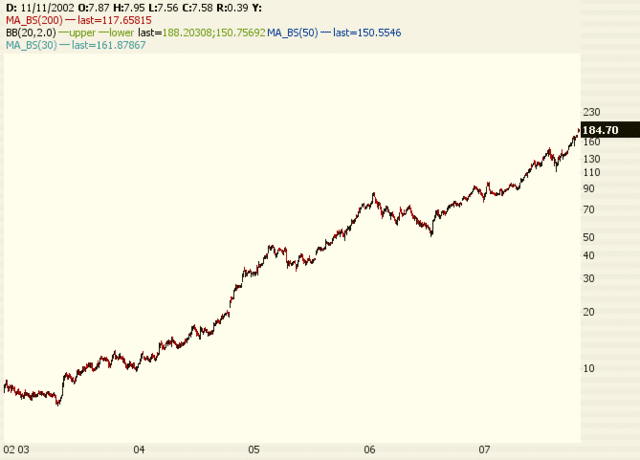 Perhaps you’ve already guessed: Apple vs. Microsoft. I trust I don’t need to inform you which is which.

Now, unless you’ve already dismissed this — as I used to do with bullish and enthusiastic claims about Apple (when it was trading at $65) — perhaps it’s time to rethink. It’s no secret to those in the know that Microsoft’s Vista has been an utter debacle, with online purchases of Windows XP now outstripping online sales of Vista. Many of these are people actually downgrading their new PCs to the former OS. I’ve worked with Vista just a bit, and frankly had no troubles at all. But I also know that consumer sentiment is what’s driving this, and if my own sentiment about the whole thing is as it is — being a very heavy power-user of PCs including enterprise-level client-server stuff going back many years — then I can only imagine the sort of momentum that Apple might be building at Microsoft’s expense.

And you know what I have to say about that? Good for Apple. Good for Steve Jobs. He has truly become a business hero to me.

Apple just came out with their sixth major release of OS X (Leopard) in as many years. Each one has been more successful than the last, and this newest one contains 300 significant improvements. Can you imagine them pulling a boner like MS has with Vista? Take a look, and I’m serious about that. Go ahead and take the 20 minutes to view this orientation.

Of course I know that PCs can do all this. It’s the integration, the seamlessness (increasingly so) and now, even with your phone if you get that too. It’s simple, beautiful, very well done and there’s no denying it; and now, there’s no more escaping it — not for me.

We have two Macs in the house already (networked with the PCs), but they belong to Bea. I’m headed out to add a third which I’ll call my own. We’ll see how it goes from there.