In spite of the general bleeding and beating I’ve been taking in the markets (on the indexes), here’s a few mitigating single equity trades that worked out. These are part of a group of 25 short-term option trades, highly leveraged (out of the money options at purchase) and super high risk. The idea is that most will expire worthless, but a few will be very big winners, i.e., hundreds of percent gains with the idea that overall one might make 10-30 percent on risk over the space of a month. Expiration is next week, so beginning yesterday, I began looking to close out profitable ones that looked like they might be getting ready to reverse.

Being as highly risky as they are, we’re talking a fraction of one percent of total account value in each one. There were 22 call options, 3 put options, all November expiration.

Charts & commentary below the fold. Click on the charts for bigger.

First up, I closed my calls on Sunpower Corp (SPWR) yesterday while it was right up at the top around $150. Could have done better waiting for today as it’s now trading near $160. 700% profit on this one. I got in around 80-90. Leverage. 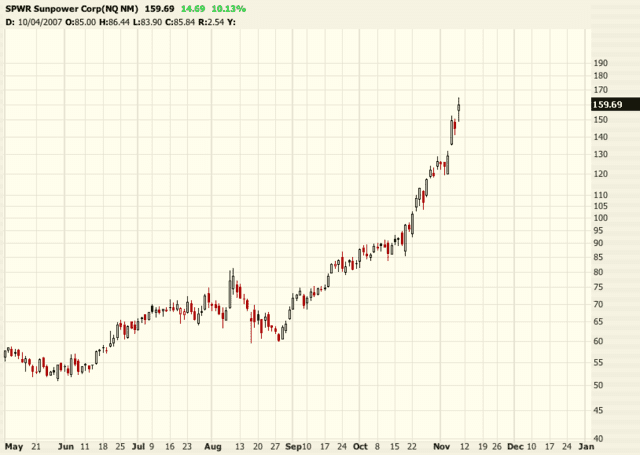 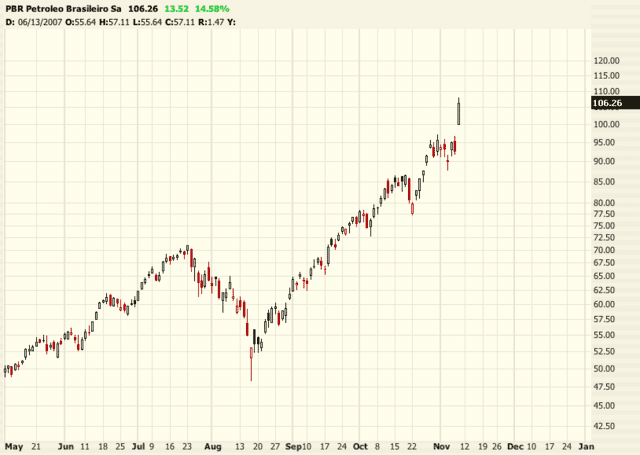 You heard about Citigroup’s meltdown, right? Well, I bought puts on that when it broke through the $45 level, getting in around $42. Then came the "lucky break" of that news of $11 billion in losses (well, I’d have preferred to lose the $500 in puts than the thousands I’m bleeding in the indexes, for sure). I closed those puts this morning at around $32 or so for a 400% profit on the trade. 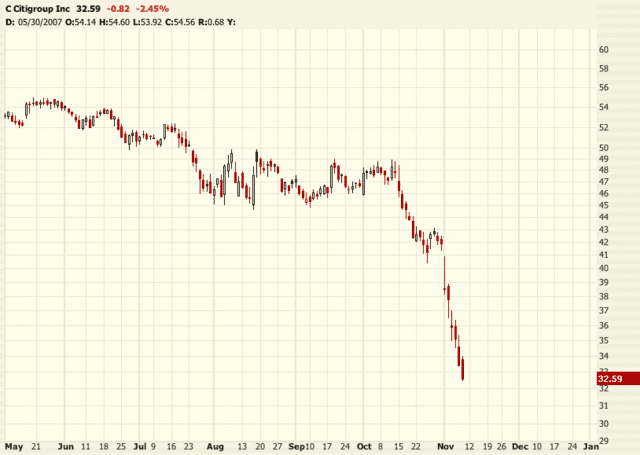 So what’s my general take? I’ll be dammed, and I may go down with the ship, but I still think we’re headed to new highs — probably by year’s end. I’m sitting on bleeding calls on many of the indexes  — though I closed out my calls on the Qs (NASDAQ ETF) very wisely yesterday, at huge profits (been in ’em for well over a month), right before it began the dive it has been resisting while everything tanks around it.

Sooner, or later, maybe at $100 per barrel, people are going to want to start selling oil instead of buying it like crazy (you do realize that’s why it’s going up, right?). Oil trades in U.S. dollars worldwide, so when they begin to sell oil to take profits (in essence, creating a huge demand for dollars), oil tops, the dollar bottoms, there are idle dollars, and they’re probably going into what are now relatively cheap U.S. securities. If the market is declining in value while the dollar is declining in value against other currencies, this is making securities cheaper and cheaper by the day. Oil moves down, dollar moves up, and dollars flowing into dollar-based U.S. securities are getting more valuable, along with the securities they’re demonimated in.

That’s my story, and I’m sticking to it, for now.