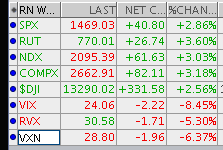 People say that markets take the stairs up and the elevator (or window) down, but I can tell you also that the pace at which a market can "melt up" can be surprising, always counterintuitive, puzzling, frustrating. It’s really the hardest thing to trade, short term; because you just can never fully believe in it. Whereas, it’s easy to believe in a meltdown.

If I was going to take the bear side, now, which I’m not, it would be a good time to short (sell into strength, buy on weakness), but with a tight stop. It will be very good for retail business, particularly in the face of a melting R/E market, if The Street can put in a reasonably profitable year of at least 8%, which means 1530 on the S&P by the time Santa comes along. That’s another 60 points to go and it will be challenging enough holding onto the 60 already gained in the last two days.

Update: Here’s what Carl has to say, and this after thinking he could get in long at about 1390 sometime this week. This is part of what makes Carl Futia worth listening to. He’s honest. The second he sees he’s wrong, he dumps his plan; and he never bothers making excuses.