Something New: moneygoround.net
“Land of the Free” Updates

Yesterday's frittata was so good that I made another this morning. 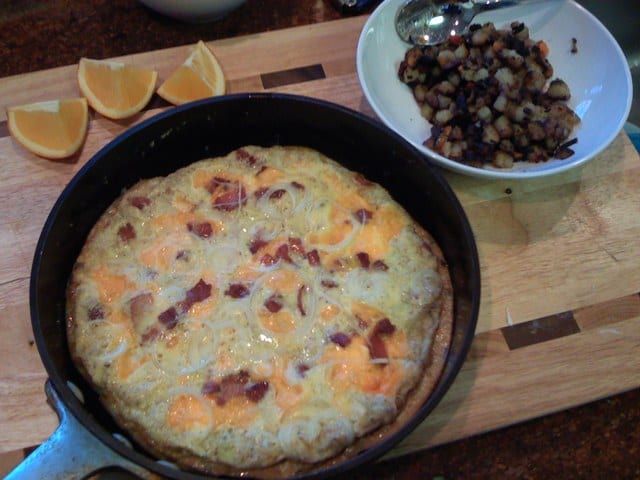 This is a bigger one. Six jumbo eggs. I also "skinned it" by heating up the pan on high prior to adding the eggs and placing it in the oven. This creates a "crust," of sorts, so that the cold leftovers are nearly indistinguishable from pizza. Try it.

There's a small amount of finely chopped, fresh onion added to the egg mixture. On top of the mixture went a few dollops of cream cheese I had, then slices of cheddar, four strips of bacon, fried, and then a lot of onion slices paper thin (I love onion of all sorts — onion and bacon makes everything better).

On the side is some fried potatoes, done in the bacon grease (just a bit), with onion (getting the theme? — some day soon I'll reveal my original "toasted onion omelet" recipe) and sweet peppers. Because of the strong bacon flavor in everything, and that I do fried potatoes in a large variety of ways, I slightly burnt these on purpose to really bring out the onion and pepper..

Just a word about last night. We went up to San Francisco where my business partner's significant other of many years was hosting a birthday party for a friend of hers who's a local chef and graduate of the San Francisco Culinary Academy. He usually caters her unbelievable and amazing parties, but since it was in his honor, a Paris-trained chef who's a friend birthday-bay catered. To. Die. For.

I stuck to the veggie and meat items, steering clear of the amazing pastries, chocolate fondue and such (I did dip into the perfectly ripe munster — of the sort I once stunk up an entire B-767 from Paris to Boston, but that's another story). The rack of lamb? Jesus. I'm not even going to get started.