Here's breakfast, a nice little 4-egg frittata and fresh fruit for Bea & I (we had leftovers). I always use the jumbo-sized eggs. 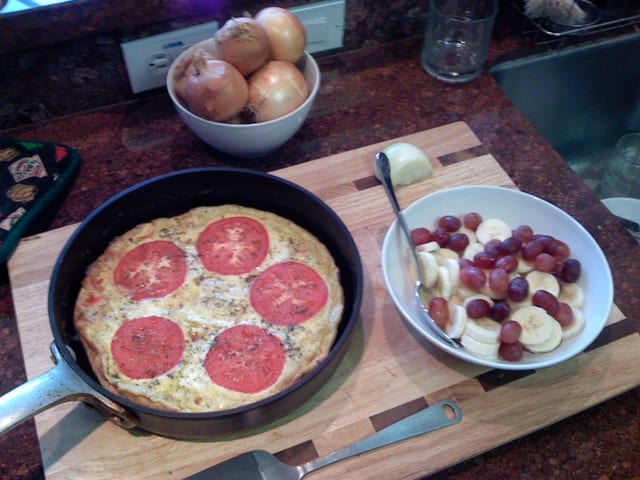 It's very simple to do. Heat the oven to 350 and as it's pre-heating, put your ingredients together. What you use is as flexible as an omelet. In this case, I've got three or four small sweet peppers, red, orange, and yellow; half of a small onion, and about a quarter pound diced ham. I sauteed the peppers, onion and ham in a bit of olive oil until the onions were translucent. Then I melted just a bit of butter in the cooking pan, added a bit of olive oil, dumped in the egg mixture, added the aforementioned ingredients, and then topped it with a small amount of pepper jack cheese, the sliced tomatoes, and some dry Italian seasoning.

Twenty to twenty-five minuted in the oven and you're done.

Now let me harp on evolutionary eating for just a bit. And by the way? It works for animals too. Let's look. By any standard, this is a fine-looking dog. That's Rotor, my nearly nine-year-old American Rat Terrier. He walks/runs 4-5 miles per day, every day of his life. Those pics are from about two years back as he was performing stud duties. He's already pretty lean, and it might take a trained eye to see this, but here he is now, after about a 20% weight loss but with the same level of daily activity. 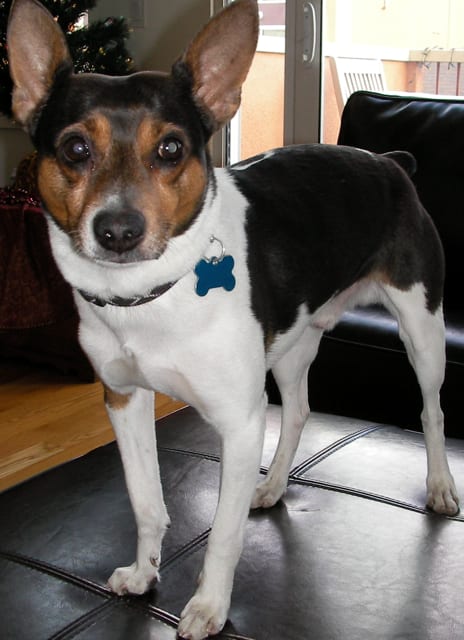 In the photos on the linked website, he's muscular, but a bit rounded and smooth. Here, you see the definition between muscles, as well as their ripple. In short, even though he was exercised at maximum, he still had visceral and sub-cutaneous fat that accounted for up to 20% of total weight, or more.

Best of all, in the last six months since going on "the diet" (change in food, but he eats as much as he wants — he often skips meals all on his own accord), he's like a three-year-old again in terms of energy and his willingness to jump on and off of things and run at full tilt. His right front leg was broken at the joint when he was still a puppy and even surgery and a pin couldn't completely fix the damage. But up until a few years ago you'd have never known except the leg is crooked. He's been slowing down recently, though, and even if it's not the diet providing the extra spunk, a drop of 20% of the weight on that damaged joint is certainly beneficial.

What's the diet? EVO – The Ancestral Diet. They like both the dry and the canned, and the canned (all 95% pure) comes — in addition to standard beef and chicken & turkey — in rabbit, duck, and venison. I was surprised also that the cost is not outrageous. It's probably no more than $20 per month to feed both dogs.

Now, take a look at this, from Art's site. First, remember 54-year-old "Super Mike?" Here's a follow up that shows you his progression. Art's site cuts off the best part of the photo, so here, and you can click to see it full size.

Now, ask yourself: if you didn't see those date stamps and just looked at the face, in what way would you order the pictures and over how many years? According to Mike, he's been following Art's eating regime for a bit over a year. You can see a small improvement in the three whole years from 2003 to 2006, but he actually reduced the number of workouts in the last year, and instead of following all the "experts," which is virtually the only advice you'll get in the mainstream, he followed a "crazy" regime that cuts way back on cardio, dumps the idea of high carbs to "store glycogen," dumps the idea of many small meals, dumps the idea of "whole grains," dumps the idea of energy drinks, "electrolyte drinks," protein shakes, and all the other crap that abounds in the "fitness industry."

Just look for yourself. Most striking, of course, is in the face. Notice also the deep definition between muscles, demonstrating the loss of all kinds of visceral and subcutaneous fat.

And it's so simple. For a rule of thumb, I just tell people to imagine what they'd have eaten during our two million years of evolution, prior to the last ten thousand years of agriculture. Meats, vegetables, fruits, nuts, eggs. Eat when you're hungry, not at "mealtime," and learn to accept some hunger and do work on an empty stomach (animals hunt on an empty stomach; if it was full, they'd have little need of a kill). I've recently been experimenting with skipping lunch entirely on my workout days (I'm at the gym by 4 p.m.).

I've begun making a series of shirt-off photos as I progress. Like Mike, from 2003-2006, I've built substantial muscle and strength. But I've still got a lot of fat to loose, so I'm now very serious about eating right. I even made it through Thanksgiving dinner at the in-laws (much of which I cooked) and was already hungry by the time I went to bed. I had lots of turkey, a slice of ham, a small amount of mashed potatoes, a little gravy (which I made from the neck & giblets — with very minimal starch for thickening), and lots of vegetables. No pu'kin pie.