The principle hypothesis, generally accepted, is that obesity is caused by eating more calories than are expended, the excess being stored as fat. Reduce intake, increase output, or both, and fat comes off. It's a tidy equation. Overeating causes obesity.

Suppose you come up with a competing hypothesis that says that over or under eating, and/or low or high energy output are caused by the accumulation of fat, i.e., a hypothesis that at first glance seems more complicated, but is actually — Occam's Razor style — simpler. What if, for whatever reason, a body simply accumulates fat, and overeating and sedentary behavior are in response to it? Can you see how that's simpler?

So then the question becomes: what causes fat accumulation, which then sets off what in some ways is a positive feedback mechanism, including behaviors that are widely seen as causal rather than effects?

Well I'm no expert at this, but Gary Taubes has spent the last several years pouring over studies going back as far as the 1800s. Rather than rehash it, I've got links for you accumulated from Chris at Conditioning Research.

The lecture is by far the most compelling, I think. Much of what he demonstrates seems to contradict the conventional hypothesis and his "anarchy of fat" hypothesis seems to fit better. It really seems to come right back to Atkins. I had tried that diet several times going back as far as 1991, but could never stay on it. I always lost weight, always felt good, but would eventually give in to very strong cravings for bread and other high-carbohydrate foods. Then I thought walking 3+ miles per day would help. In five years and over 5,000 miles, I put on another 25 pounds. Walking increased output, which made me hungrier, and my finely tuned fat-storing machine, my anarchistic fat, was all too happy to gobble up those calories as even more fat.

The workouts over the last nine months — eventually combined with a more evolutionary approach to eating — got the ball rolling, but the fat loss was very slow. That's fine, but it would have taken about two years had progress remained steady. In less than a month, I have lost more fat than in the previous eight months combined, and with no change in my exercise schedule of two intense 30-minute sessions per week to build muscle.

The big change began with the fasting. The first two fasts (right before the Holiday break) lost me about a pound. The next two, first week of January, about two pounds. But then I began to notice something really interesting and profound: my appetite began to change. I've lost all appetite for fruit and I just pick at vegetables a bit. I like nuts and blueberries, I'll eat a salad but it seems what I'm feeding is the desire for crunch more than anything. What do I crave? Meat (the fattier the better), eggs, cheese. Here was my dinner, Saturday night. 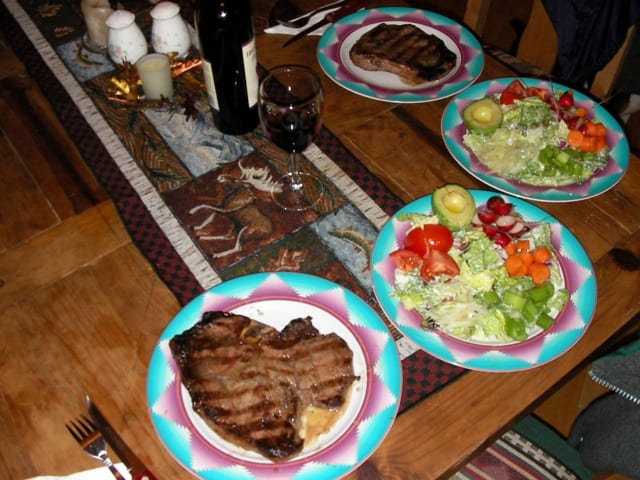 A 20oz T-bone. By the time I got three bites into it, I had no interest in the salad. I finished off the entire thing with ease, and though I didn't feel full, I only cared to pick at the salad (I went for the avocado and radishes).

In other words, I find myself eating more of an Atkins style quite by accident, unexpectedly: as a style I crave rather than forcing it on myself.

It leads me to a simple question. In an evolutionary context, where does everything begin? My answer: hunger. Before we ever ate a bite, we were hungry, and over two million years of primitive existence, we were hungry and that was the primary motivator of everything. And, so, what did we desire to eat, above all, when hungry and we had a choice? For me personally, I know the answer to that and the signal is clear as a bell. And I don't think our primitive ancestors tossed away the strip of fat, either. I don't think so, because for more than 40 years of trimming it off, I now find myself eating every tiny bit of the fat, enjoying it immensely. And I crave that fat far more than that salad, and that surprises me. I suspect that we have the capacity to eat other things because meat sources weren't always around, just as other primarily carnivorous animals will graze on grass (like bears) when their primary food isn't present.

Anyway, in the last four fasts over two weeks, I've lost 8 pounds. Now that I'm eating mostly meat, fat, and eggs (a little veggies too), the fat is falling off me at a rate of four pounds per week. Here's a typical breakfast, though this was last week and I'm now skipping the apple and adding more bacon, and it's usually three eggs now. 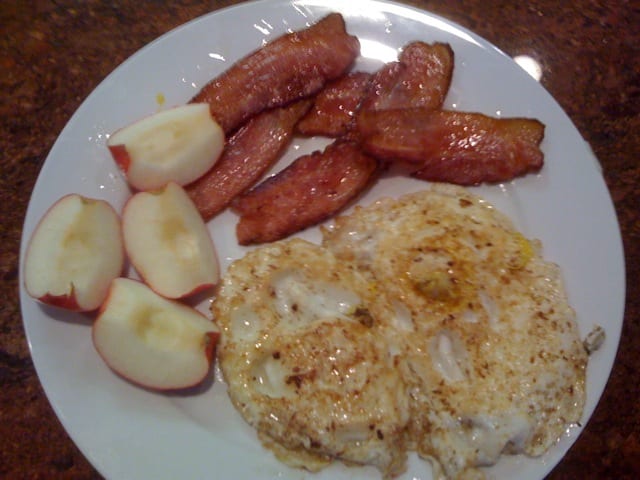 The bacon goes straight from the pan to the plate so it's plenty greasy, then the eggs are fried in the bacon grease as well. Most satisfying.

I'm not going to be foolish, though. Another 20 pounds, which will come off quickly, and I'll schedule a physical and have the blood work done. I suspect it will be fine and much better than the last time. I feel just fabulous, am sleeping better and longer than since I was a teenager, and I turn 47 tomorrow.

These are my personal experiences and results — certainly not advice for anyone. But if you've struggled with being a gluttonous fat slob like me for the last two decades, it might be worth a serious look.