A Path In Pictures

This was me, tipping the scale at about 230. For perspective, I was 165 when I graduated high school. Normal adult weight would probably be around 175 without doing anything to build lean muscle. You'll notice how lean, trim, and lovely is my wife Bea, with whom I celebrate seven years of marriage, tomorrow. 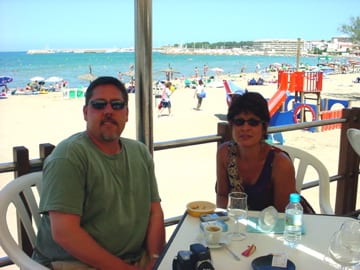 One reason I've delayed publishing photos of my progress is differences in perception. I write a lot about this, so my credibility is at stake; and even though I feel the changes all over, I just can't tell how other people will generally react to photos. If they react negatively, that doesn't do me any good, which has nothing to do with making progress, but it does have to do with the blogging aspect. This is bolstered by the fact that I've seen a few such expositions other bloggers have posted, and have been less than impressed. So, there's a balance of sorts. Ultimately, due the subject matter, I feel it's necessary to put my skin where my mouth is. So I've waited until I was certain the results were objective enough that readers and lookers aren't going to think I'm full of shit.

Another aspect is that part of why I do this is to hold myself accountable. I was a Big Fat Gluttonous Slob. It's the simple truth of the matter. Yea, it's partly not my fault because of the carbohydrate culture and I was just unaware, and often uncertain due to all the contradictory information. But now that I know, and can see the results of the combination of weight lifting, low-carb, moderate protein, high (animal) fat, and intermittent fasting (the key and foundation), I simply have no excuse, since I value having a lean, healthy looking physique. If you don't care about yours, I've got no argument with you. Some people don't, and they ought to be left alone. I'm really not trying to shame anyone. If you value something better, then you already feel the shame. Apply some knowledge and discipline and I believe you can make progress. I harp on it, but intermittent fasting is the essential key, and it's not so much the added wight you loose more quickly, but the radical reprogramming of your ancestral appetite. I would probably already be at my target had I discovered fasting in May rather than December. 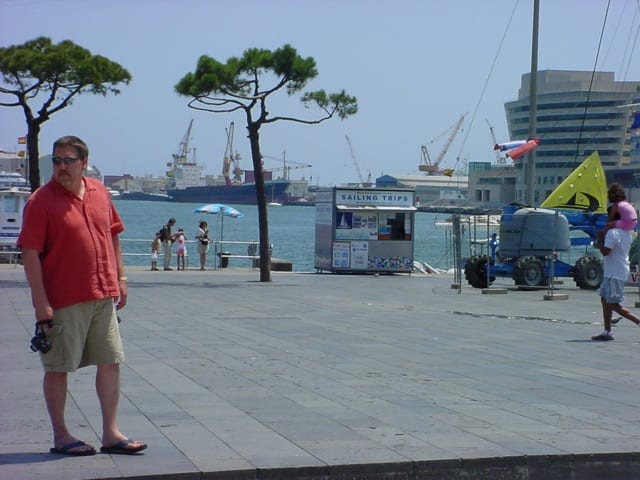 So I began working out at the beginning of May '07 with short, 30-minute highly intense weight lifting sessions, twice per week, with a personal trainer of 13 years experience and a bachelor's degree in exercise physiology (he really knows his stuff). There's virtually no rest in-between sets, so I was accomplishing in a half hour what I never did in three times the duration when on my own. Initially, my bodyweight increased, which was to be expected due to lean gain. Then it dropped, and seesawed its way down to about a 7 pound net loss in the first six to seven months. But I wasn't eating even close to properly, believing perhaps that if I just built enough lean muscle, I could go on eating lots of the junk I loved. I also wanted to focus on one primary thing, initially. It was progress, but it was taking long. So I eventually decided to clean up my act and eat more "Paleo" or "Art DeVany-style," beginning in about November '07, or so. The net loss rate seemed to about double during November and December, and it was right prior to the Xmas holidays that I discovered intermittent fasting, thanks to both Art and Brad Pilon, author of EatStopEat.

So here we go. On the left is from November, after nearly seven months of working out, and a few weeks of eating better. On the right is today, almost three months to the day later. I began fasting nearly two months ago and generally try to do two 24-30 hour fasts per week, and usually ending right after my two weekly workouts. 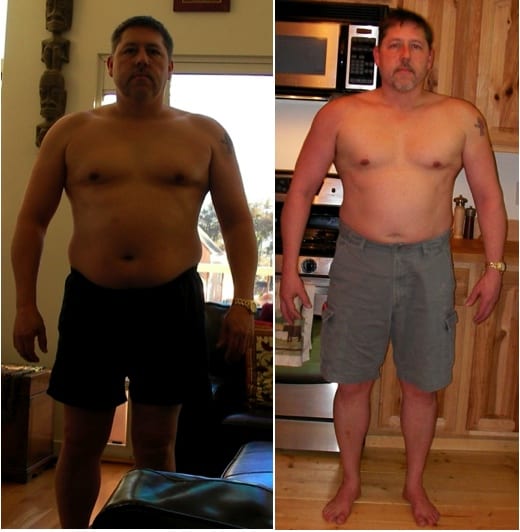 In the last two months of "appetite reprogramming" due to fasting, I've gone from eating "paleo," to a more highly "carnivorous" diet with little in the way of fruits of vegetables (some nuts, yes). It was high protein, and this was driven by appetite as a result of fasting, so I just went with it. But it kept changing and now I eat less than half the meat, lots more fat (animal; saturated), and bits of veggies, fruits, and nuts.

Here's the entire photo gallery which I will continue to update and provide notice here. Comments and questions are welcome and encouraged — in the comment form or via email. I'm happy to assist anyone if I can.

Later: Karen DeCoster has some keen observations and kind words about my progress. I have always looked to Karen as sensible about diet and exercise and am proud to have made her grade. She knows what she's talking about.