For those following along with me on this exercise, diet, fasting journey, it should be quite apparent that my diet has shifted considerably since I began this in May '07, to where now I am quite comfortable eating a diet very high in saturated fat mainly from animal sources (coconut oil would be an exception). But how did that happen? Did I do a lot of research on it and decide it was the best approach, or what?

Nope. I just followed my nose, or, more specifically, my appetite. None of any of this was remotely apparent prior to having undertaken a number of fasts, normally of 30-hour duration, culminating in a workout for most of them. At first (prior to beginning the fasting), I gradually adopted a "Paleo" approach because it made logical sense. In evolutionary time scaled to one year, humanity has been exposed to grains for about a day, and concentrated vegetable oils for ten minutes (that's a short YouTube; check it out). But then something odd happened with the fasts. My appetite changed dramatically. Now, why would that be? Why does it persist? Long story short: it originally changed to wanting just lots of meat, but over time, even my appetite for huge cuts of meat has subsided. Now, I seem to desire mostly very high fat content (animal, including unsalted butter), modest meat, and just very small bits of carbs in the form of some vegetables, nuts, and a little fruit (had some pineapple with breakfast, yesterday). Incidentally, these cravings, tastes, and hungers are unmistakable. Fasting seems to heighten the senses in this regard. For example, I have become very sensitive to salt and add little to none on most things, anymore. Normal salted butter tastes very salty to me now.

So in order to accept the hypothesis that dietary saturated fat I hunger for is damaging, in the context of mostly non-agricultural diet — i.e., little to no grain-based products — it would be necessary to conclude that either (1), human hunger adversely motivates the human organism to harm itself (which is prima facie absurd), or (2), that I suffer from some ailment most other people don't have that's causing me to hunger for things that are harmful to me, which seems unlikely as no other symptoms present (quite the contrary: I feel better than I have in 20 years). A third possibility, equally unlikely in my view, is that just as my hunger changed from lots of meat to more modest portions with higher fat, I'm on the cusp of yet more appetite changes that'll have me eating from fruit baskets and standing in line at Fresh Choice in no time.

So there I was, in somewhat of a quandary. Virtually the whole nutritional world stands against me, while friends jokingly propose that they take out life insurance policies on me. Yet, I know what I hunger for, and I'm pretty sure that some reasonable semblance of the path I tread has been traveled before me, before "nutrition" was even approached as a science, and with nothing but apparently excellent human results. So mostly just to satisfy my curiosity, along with the perverse pleasure in pointing out to the horrified that they actually know nothing of what they talk about, only that they "know" "artery-clogging-saturated-fats" from everything they see, hear, and read in the major media outlets. So what do I know, now? Well, after lots and lots of poking around, reading the abstracts and texts of many studies, I know at least some of the actual data upon which much of what's reported is based. I also know that many studies are not reported at all in the mainstream. I know there is nothing like a scientific consensus; say, like the consensus that a certain strain of viruses cause the common cold. I know that there is tons and tons and reams and reams of studies and data, going back decades, that not only doesn't support the saturated fat, cholesterol hypothesis, but actually contradicts it, and I know that from these data emanate hyper-complex sub-hypotheses in attempts to explain it away.

There has never, ever been a single study even remotely linking high saturated fat intake to either elevated total cholesterol, or heart disease (there is to the contrary, though). Not to mortality either (though there is to the contrary). Neither are there any studies conclusively linking high cholesterol to heart disease or mortality, though there are studies linking low cholesterol to higher mortality. It just goes on and on.

Via Carbophobe, I came across this book review of Dr. Malcolm Kendrick's The Great Cholesterol Con: The Truth About What Really Causes Heart Disease and How to Avoid It. From there, I found this great article by the doctor, which I understand to pretty much summarize much of what's in the book. Read it, though here are a few short excerpts to wet your appetite.

The cholesterol hypothesis can be likened to a cathedral built on a
bog. Rather than admit they made a horrible mistake and let it sink,
the builders decided to try and keep the cathedral afloat at all costs.
Each time a crack appeared, a new buttress was built. Then further
buttresses were built to support the original buttresses.

Although direct contradictions to the cholesterol hypothesis repeatedly
appear, nobody dares to say 'okay, this isn't working, time to build
again from scratch'. That decision has become just too painful,
especially now that massive industries, Nobel prizes, and glittering
scientific careers, have grown on the back of the cholesterol
hypothesis. The statin market alone is worth more than £20billion each
year. […]

The MR-FIT trial in the USA was the most determined effort to prove the
case. This was a massive study in which over 350,000 men at high risk
of heart disease were recruited. In one set of participants,
cholesterol consumption was cut by 42 percent, saturated fat
consumption by 28 percent and total calories by 21 percent. This should
have made a noticeable dent in heart disease rates.

But nothing happened. The originators of the MR-FIT trials refer to the
results as 'disappointing', and say in their conclusions: 'The overall
results do not show a beneficial effect on Coronary Heart Disease or
total mortality from this multifactor intervention.'

In fact, no clinical trial on reducing saturated fat intake has ever
shown a reduction in heart disease. Some have shown the exact opposite:
'As multiple interventions against risk factors for coronary heart
disease in middle aged men at only moderate risk seem to have failed to
reduce both morbidity and mortality such interventions become
increasingly difficult to justify. […]

This quote followed a disturbing trial involving Finnish businessmen.
In a 10-year follow-up to the original five-year trial, it was found
that those men who continued to follow a low saturated fat diet were twice as likely to die of heart disease as those who didn't. […]

Variations on a theme emerged. It is not saturated fat per se
that causes heart disease. It's the ratio of polyunsaturated to
saturated fat that is critical. Or is it the consumption of
monounsaturated fats, or a lack of omega-3 fatty acids, or an excess of
omega-6? Take your pick. These, and a host of other add-on hypotheses,
have their proponents.

As of today nobody can – or will – tell you which type of fat, in what
proportions, added to what type of anti-oxidant, vegetable,
monounsaturated fat or omega-3 is the true culprit. Hugely complicated
explanations are formulated, but they all fall apart under scrutiny. […]

Perhaps even more important than this is the fact that a falling
cholesterol level sharply increases the risk of dying of anything,
including heart disease.

There's lots and lots more, so read the whole thing if this is of interest to you.

And so back to my own personal experience, I took this just an hour ago. Less than a year ago I pretty much filled these out. And by the photos, you know what I've been eating. 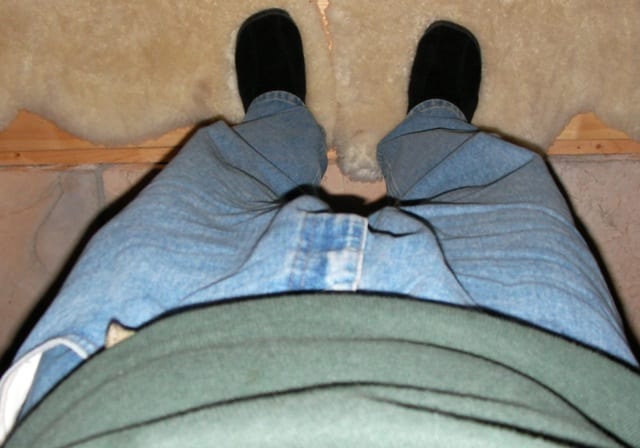