As far as the fasting goes, it was much easier after the first one or two-like you said it would be. And yes it is interesting that the 24hr is tougher. It may have something to do with the bodies metabolism during a resting period that follows a large meal, opposed to your lunch and then several hours before the resting. Intriguing.

I think so. Skipping dinner isn’t such a big deal and it’s something many of us have done a time or two, particularly when not feeling well. Then the enhanced sleep you get conditions your body for the fast. If you begin the fast after a normal dinner, then sleep that night is nothing out of the ordinary for your metabolism. Since beginning all this, I don’t get hungry on a normal day like that until 10 or 11, but if I haven’t eaten by 1300, then the hunger rages unabated for the rest of the day and that’s not pleasant. I suspect that if I just toughed it out and went the whole day without and then slept, day two would be far easier.

I also run two high school boys games yesterday in the middle of the fast and never felt a hint of any weakness or hunger! The other ref had 3 "power" drinks, a snickers and a banana in the 3 hour span. Me…H2O.

Oh, yea. "Healthy" candy. Well, if you noticed the comment on my previous entry, I worked out for the first time in a fed state after working out 25-27 hours fasted for weeks. I much prefer working out fasted. It’s just more steady.

I am curious to what types of meals you eat-besides the steak and the bacon and eggs?

Here was this morning, 11am: 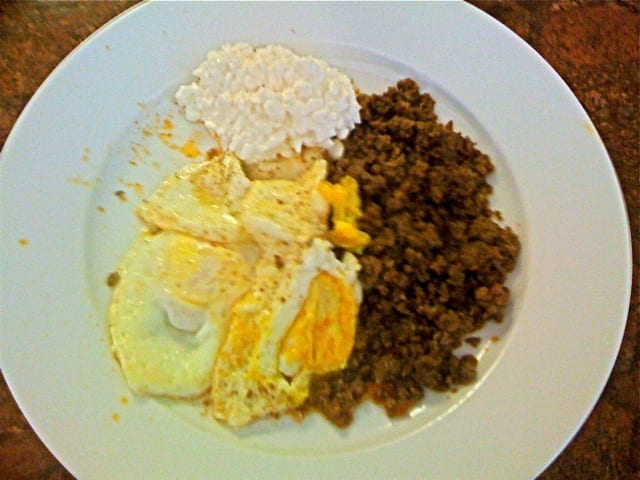 That’s 80/20 ground beef with most of the fat left in (finely chopped onion, too), with lots of spicy taco seasoning added to take up the fat (I make it a batch at a time and can then just take a bit at a time from the fridge and nuke it), with about a tablespoon of bacon grease from the fridge added before nuking and then stirred in. Two omega-3 eggs fried in a full tbsp of unsalted butter (since fasting, my taste sensitivity to salt has gone way up) and just a bit of full-fat cottage cheese.

Sometimes I’ll skip the cottage cheese and add some fruit — usually berries or some melon. Sometimes I’ll melt some cheese, or I can make an omelet of that. Sometimes some onions and/or sweet peppers added in.

Here was another one from a week or so ago. 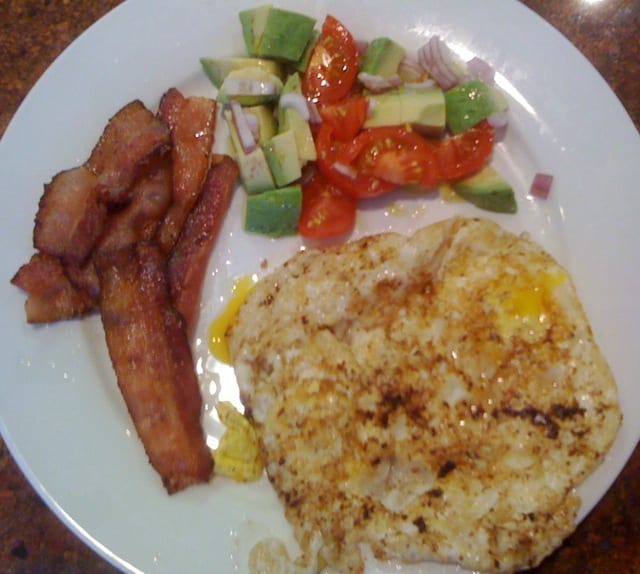 In addition to the bacon & eggs, that’s red onion, avocado, and cherry tomatoes drizzled with olive oil. I do lots of different things and am getting in the habit of snapping a pic with my iPhone, so I’ll do more posting of those.

What are your goals?

I just turned 47. The last 10 years have been kind to me in terms of business, but awful in terms of personal appearance and just feeling good. There was simply no way to justify it being anything other than eating too much, too frequently, and the wrong things. I took up walking, which I still do, and it didn’t help at all. Beginning the weight lifting last May helped, but not as much and not as quickly as I believed it would. Again, I was hoping it would be some magic bullet or something and I could go right on eating like I was. Once I began to eat more paleo, things improved, but there was an unpleasantness about it. I felt plenty smug because I was "eating properly," but I wasn’t really eating what I desired, which includes lots of burgers, fries, pizza, bread, and so on. Fasting is what changed everything, because it changed what I desire to eat, and what I desire to eat, and eating it, is creating rapid results.

Goals? To keep at it — for life, really. The goal should be to feel happy, to feel good in your own skin. Feeling smug because you are "eating right" is no substitute. People can scoff their asses off at my high-saturated fat diet with minimal vegetation and I’ll invite them to go fuck right off because I don’t care what they think. I feel good because the food is satisfying, it leaves me feeling good physically (high carbs, particularly pizza, make me feel like utter shit for hours — and yet I craved and ate them regularly — so go figure that), and I can see the physical changes, and you all will too, in good time (once I’m proud enough of my progress to show the awful "before" photos).

I love the email interaction. Keep ’em coming. I’m not publishing identities, but if you have a question, observation, or personal experience you’d rather not see on the Intertubes, just include that. Just keep in mind that my primary motivation for this sort of interaction is that it’s something other readers might find useful or entertaining. Of course, the comments are always open as well.