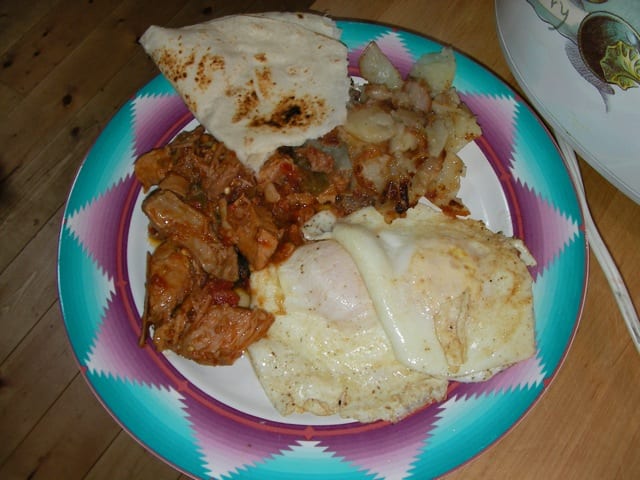 Chili Verde, which I made last night, eggs fried over easy in unsalted butter, a bit of potato fried in lard, and a half of a tortilla heated directly on the flame of the gas stove. Not strictly in keeping with my no-to-low carb regime, but I keep it to a real minimum and am still well on my path to regaining control of my own body form.

The recipe for the chili verde is one of the very few that's not of my own creation. It's my 2nd-generation Mexican father-in-law's recipe and I've been cooking it for nearly ten years. It differs from the traditional recipe in that rather than using tomatillos, we use tomatoes. One day I'll try it with the former, but I'm in no rush because this way is so damn good. I have yet to ever prepare it for a single person in all these years who didn't love it.

The preparation is quite simple. Cut up the pork chops and brown them in a pan. Then take the garlic, onion, and peppers and lightly saute, just a few minutes and certainly not enough for the onion to become translucent (I've made it without this step and I don't know it makes a lot of difference). Place all this in your cooking pot, add in the tomatoes, tomato sauce, salt & pepper if you like, a little water if you need (I never do), bring to a boil and then cover and simmer for a couple of hours or so, until the pork falls off the bones and will easily fall apart.

That's the recipe as it was. I do a couple of things different. I drain a couple of cans of medium black olives and add those. I also cook it low and slow in a crock pot. I prepare in the evening and turn on the pot (low) when I go to bed. Even turning it on at 12 a.m., it should be ready by 6 or 7. If there's any rubbery feel to the pork, it's not done yet.

I took this photo on a plate; however, my favorite way to eat it is in a bowl with two over easy eggs on top, and I eat it with a spoon (normally I'm not having potatoes, tortilla, or beans).

I like to make it pretty hot. This particular one has eight peppers, with seeds. I could stand it a lot hotter, but since we'll consume it over a few days it looses spiciness as it sits in the fridge. So, I like to start out hot. I made a batch over the Christmas holidays up here and I made it seedless. The heat was very substantially reduced, far below my preferences. However, we had family guests and I wanted to take it easy on them. One other note is that when it's done the fat from the pork will make its way to the top and you can easily skim it. I leave it in. It's easy enough for those who don't want to work around it, which simply leaves more very healthful, highly saturated pork fat (lard) for me and the Okinawans.

Try it out. It's really a fantastic recipe and you'll probably end up using it for as long as you cook. Simple. Delicious. Wonderful.