I suppose the blog is being so neglected lately because the rest of my life isn’t. I’m working quite a bit, every day, and there’s lots of activity and legal stuff and presentations to VCs and whatnot. Then, every time we present, it’s go back and change everything to be that much more tight for the next one. 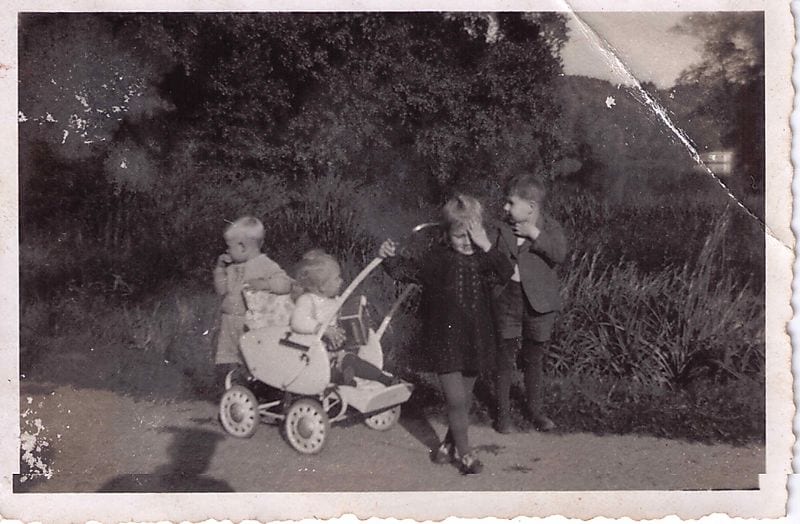 From the left, that’s my dad Lothar, his younger brother Hans, older sister Brigitte, and the firstborn, Manfred. Circa 1941, I’d say. All but Manfred are still fine and dandy and now live here in or near the Bay Area. Manfred died in about 1978 when most of the family still lived in Reno. He was a Type 1 diabetic and an alcoholic. Not a good combination.

I’ll probably get to scanning up the rest tomorrow and will probably do a static page that I can fill in with details so and as family members are able to sort out who’s who and report back. Can you imagine? That photo, sitting in the hands of strangers 100 clicks northeast of Berlin all these years, who just happened to be home and notice at the very instant my dad and brothers as they came, decades later, to check out the house across the street? Fortune.

Nice 'thank you' email from Billy-J, accompanied by this post. Then, there's longtime reader and friend Justin Owings (that's a 5-page post, the whole thing a good read).

Good work, gentlemen, and it's just as Billy-J says: "…the more I get into it, the more I want to do it." Precisely; there is no way I'd advocate any of this stuff if it just didn't feel so right. It takes a while. You'll have fatigue, some headaches, nauseating hunger, and workouts at the gym that make you feel as though you're going to die. Then, you begin sleeping like a baby. You break through to a point where you're almost never very hungry at all. Your whole attitude about food changes and when you do eat, you do so luxuriously, with wonderful food — or you leave it. I'd just as soon skip a meal or two than to eat junk, anymore.

The other day I piged out, like: gorged myself practically. On fruit. Some neighbors had some of the best cherries I have ever tasted, along with a bunch of ripe berries, and I had some perfectly ripe Kiwis. Never thought I'd pig on colorful fruit, and not on a pizza, burgers, or fries. I felt terrific.

People ask me where the high fat diet went. I'm not on a diet, anymore. I'm just following my appetite. Sometims it's high fat, and sometimes it's fruits and veggies and nuts Those are the variables: fat vs. natural carbs. Protein stays about the same and is a bit less than when I first began fasting. So, it's not an exercise program, not a diet, not a fasting regime. It's as Art calls it: a "life way." Indeed, and I am loving it.

Here's a additional tidbit. You already know that I have come off all prescription medication over the last few months: hypothyroid, gastric reflux, and sinus allergy. It's springtime with the wind blowing, here, and I cannot believe I'm not debilitated. That was a condition I lived with from the time I can remember, about 10 years old. Now, nothing. No more than a bit of a sneeze from time to time. But a few weeks ago I was reading Taubes, whee he discusses the journals kept by physicians in the 1800s who had traveled far and wide to study and provide care to native populations. In addition to never seeing cancer, diabetes, high blood pressure, obesity, etc., many also mentioned that they never saw gum disease. Well, I had surgery for mild gum disease about six years ago and have to have my gums cleaned three times per year (used to be four). But I had missed all my appointments for the last year, felt fine, but thought I ought to go in. It had been 13 months. The hygenist began doing her measurements and testing to se how deep and hard she would have to go to induce a bleed, and so on. Then she called the dentist, who examined me, and then they both asked what I had been doing, because there is no evidence of gum disease, or that there ever was. Moreover, my gum health is superior to when they first began documenting the decline 15 years ago, in 1992.

It's not a cure-all, and that's why I'm sometimes reluctant to make too much of this. Rather, for me, it's the removal of something — grains in all their forms — that is literally poison to me, causing generalize inflammation and and immune response. Taking it out of the loop, eating right, and throwing my body into a model more in harmony with our evolution slimly allows my genes to express themselves.

Yep. Kyle's got it dead on, and I can't see a reason in the world to be any more comprehensive or analytical than that sort of short sarcastic post in the run up to the November Disaster.

So, do you have the "audacity of hope?" No? Well, looks like Obama's got you covered.

Very nice hang gliding video out of Germany. Note: the string to the right of the control bar you see the pilot fiddle with is the “VG,” or variable geometry control. It essentially makes the wing stiffer and more efficient, with the trade off being less easily controllable. If you’re flying cross country, you’ll go “full VG” when on glide between thermals.

Just got off the phone with my dad, who's in Berlin. That's not so incredible these days; that he's there with three of his brothers is. Lothar (dad), Hans, Ingo, and Wolfgang met up in Denver two days ago and flew Lufthansa to Berlin, from where they'll make numerous excursions over the next week or so. The other important tidbit is that the last time the four of them were together in Europe at all was when they left as a family of eight in 1952 on the transport General M.L. Hersey. Since then, my dad has been back once, but only a few years back. Ingo is there all the time, as he works for an Austrian company that makes power-grid scale transformers, as a U.S. representative out of Reno, NV. Hans and Ingo haven't been back until now.

Yesterday they went to Wriezen, about and hour northeast of Berlin where their grandparents lived and where my dad got separated from his mom, dad, and siblings during the war — and for about two years after. The house still stands, is a total wreck, but according to the guy across the street, hasn't been occupied since 1962. But that same gentleman used to live in the house himself, and had a collection of photos that had been left there. Yep: all kinds of photos of my dad's cousins, uncles, aunts, even some of him and siblings. THose would be pre-WWII, and they survived in the hands of a stranger, survived the commies all these years to be placed in the hands of those who ought to have them. Just wow. I'm going to see if I can get my hands on them for digitizing purposes.

Tomorrow, they'll all take the train to Szczecin, Poland, which was known as Stettin, Germany when my dad was born there in 1938. Hope he sends along some photos.