I've been spending time in the evenings catching up on some of the blogs I'd not read in some time and Modern Forager is on the list.

Did you know that "You Walk Wrong And Your Shoes Are To Blame"? I do; that is, I did, but I don't anymore. If there's anything I know a whole very lot about, it's walking, and I've never even read anything about it. I walk. I walk a lot. I walk a fuck of a lot. It began in February, 2003, so nearly 6 1/2 years ago. Every weekday morning, very nearly 100% without failure, my day begins — be it 6 am or 8 am — with a morning walk with the dog — now dogs — for about 3 1/2 miles which, with all the sniffing an peeing — them, not me — takes just about 55 minutes. I figure we're coming up on 7,000 miles, and that doesn't count the one or sometimes two additional walks in the afternoon and evening, many of which Bea does, but I do plenty. A very lot of what I believe I now understand about health and fitness and our maladaption to many aspects of civilization in an evolutionary context, comes from observing my two rat terriers. And once I began to remove things harmful to them, they improved too. Rotor is now 9 and spunkier and far, far leaner than he has been for many years. I just looked at a photo from when he was 1 1/2 and I cannot tell the difference.

Nanuka ("Nuke") on the right is about 2 1/2 when this was taken, Rotor is 9. Notice those ripped hind quarters. Essentially, they're miniature pit bulls and just as viscous towards anything they deem prey. 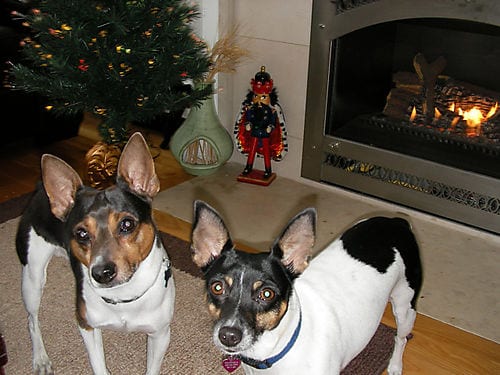 Ever know a child to take to shoes naturally? I'm sure it's happened, but more often then not, you end up searching for where the tikes took them off (almost never in the same place) from the time they learned how, until the time you finally got them to accept the prison of shoes.

I hate shoes, of every sort and kind. Always have. My mom always walked around the house barefoot when she could, and I do too. Mostly, I dislike the confinement, the heat and sweat. A good part of my life has been devoted to finding footwear that's least bad. Often, I wear flip-flops and things of that nature. But let's face it: barefoot is just socially unacceptable in most public settings and it's not changing anytime soon.

As Scott Kustes' article explains, as well this one in New York Magazine, shoes train us to walk wrong, causing injury, so we pad shoes even more, and just exacerbate the problem.

It took me three years of my morning walks to finally figure out what was going on with my feet. At first, it was the shin splints, but they adapted within a few months. I thought all was fine. But lurking was a constant stressor that finally manifest itself at about the two year point. It was generalized, chronic pain (i.e., 24/7) on the instep of both feet — as though my feet were coming apart from the inside. I tried shoe after shoe. I went to place after place, talking with rep after rep, finally concluding that it was all gobbledygook and nobody understood my problem. They were just looking to make the new (and expensive) shoe fit. I didn't go to a podiatrist, figuring I'd just be asked for my insurance and then fitted to some custom and very expensive prothesis shoe insert that I'd become dependent upon for life.

The first thing I did was ditch walking shoes. Then, I got the highest end, lightest, most flexible Nike running shoes I could find. Then, I experimented; day after day, with strides, foot placements, and spring until I found what seemed to give the most relief for the pain. Then, I focussed on walking exactly that way. In two weeks, the pain went away and I've never felt it again. I saw this last night (the image) and instantly knew that I'd worked it out exactly right. I walk exactly (even with shoes) just like the barefoot series. I don't even think about it, anymore, but just for fun, I did so this morning. Armed with the knowledge I'd taken in, I was able to notice that my stride is actually quite short. It's barely perceptible, but my heel only contacts the ground the briefest micro-second before I roll forward on the outside of the foot and spring off my fully bent (and splayed) toes, ending up with my calf muscle fully contracted. Where I used to wear out my shoes on the outside heel and inside toe, I now wear through them right square in the center of the ball of my foot. I should know: I go through a pair of expensive Nike every six months. To me, that indicates that the stress is not on the pounding of the heel, but in the compression and springing off, right from the ball and continuing outward, radially through spread toes — as it should be. My shoes now have virtually no heel or toe wear when I toss them out.

There. I've just saved you three years of time and one year of agony.

Now, take a look at this:

Can any "shoe" you know of do that? Here's a demo by Mark Sisson sprinting in them. (Note how fabulous this lean 54-yr-old looks.) They're made by Vibram, and I just ordered two pair. I got the Classic for the gym, and the KSO ("Keep Stuff Out") to try for the daily walk. I'll try to remember to tell you how it goes.

This isn't the first time I've tried to get shoes that protect, while allowing you to feel where and what you're walking on. Converse All Stars are an old classic, and I've always had a pair or two around. I fly hang gliders with the high tops. The soles are very thin and flexible, and they offer good toe stubbing protection as well. I've even tried those neoprene river walking shoes with a light sole. 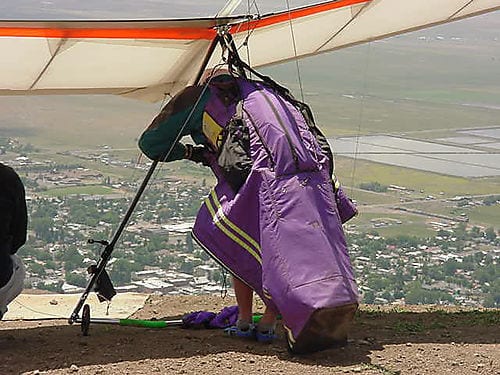 That's above the cool town of Lakeview, OR. And just so you don't think I chickened out… 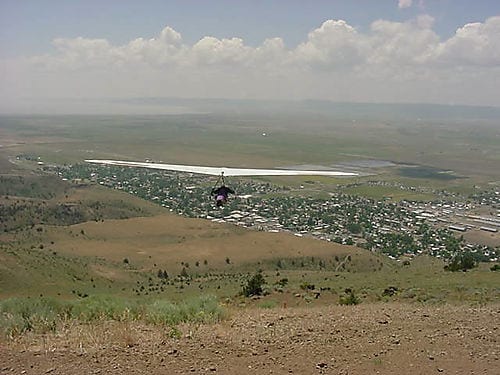 The problem was the sole was very thin and you don't always know where you're going to land, or what the terrain will be like. And without being submerged in cold water, they become a real sweat factory after a while. So, I settled on the Converse.

All said, I sure wouldn't want to have to walk barefoot all the time. Back in 1990 I met up with two friends in Thailand for a month of vacation, and one of our excursions was a few days on Koh Samet for some sun and snorkeling. We got in the water near somewhere along the upper part of the eastern side, headed south, and snorkeled all the way around, about half way or so up the western side, until, hours later, we could go on no longer. We were exhausted. We got out of the water, found one of the roads that traverse the island (it's jungle, or gravel road) and set out, barefoot. First, the heat of the hard-packed dirt road was scorching on the feet. Second, the hard packed dirt sported all sorts of small, sharp pebbles. We were reduced to putting on our flippers and walking, and what a sight that was.