Looks like I need to do some shopping, eh? Thing is, probably another 4 inches of circumference is going to come off, as the sub-cutaneous belly fat and abdominal external obliques ("love handles") melt away. That's definitely the most stubborn fat for me. It's like I'm leaning out from the bottom up and top down and the midsection will be the last to go. I'm particularly pleased with how the shoulders are leaning out, even with some vascularity beginning to show. Progress is rather slow, but it's steady and consistent and so I'm satisfied. The last couple of photo shoots here and here. 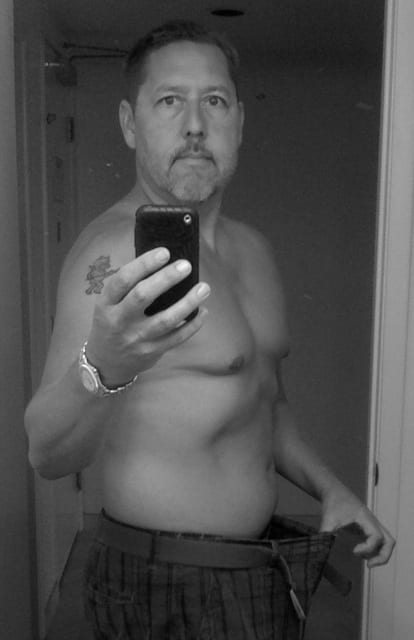 Later: Just to preclude the questions; 47 years old, 5' 10", just a smidgen under 200 pounds. Rough estimate is that 180 will leave me at about 10% BF. Whatever the figure, I'll get there. And how? Just as I've been doing to get this far. First, an intermittent style of eating that's always low in carbs with no grain products at all. No vegetable oils except olive, coconut, palm and sesame seed. Meat (and fish and shellfish), some veggies, some dairy — mostly cheese — some fruit — mostly berries and melons — and some nuts, excluding peanuts. I alternate between a few more carbs in the form of fruit, or sometimes dark chocolate (80%+ cacao) and pretty high fat, usually in the form of butter, lard, cheese, coconut milk and heavy cream. Then there's the twice weekly, 30-minutes of intense resistance training in which I've managed to add an estimated 20 pounds of lean muscle over the last year. Finally, intermittent fasting a-la EatStopEat by Brad Pilon. I fast twice per week and will go to once per week once I get to 10% BF.

The whole story is documented here, for about three pages of posts, in reverse chronological order.