First, I had an idea that the battery life on my wife's Infinity FX was coming to an end. I recently had to jump it, but wasn't sure if it was an anomoly, or what. After sitting idle for a week, it became clear. So, the day began with me going down and pulling the thing, which isn't like your father's car. Significant amounts of engine-compartment cowling had to be dissasembled just to access it. But then, it was quick work taking the core over to Kragen, getting a new one and getting it back together. Total time of operation: about an hour or so.

Then I got back to the paperwork shuffle and catch up, review of outstanding issues, and then it was over to Provanta for the monthly Board of Director's meeting, in which I undertake the role of Chairman.

After that, more car stuff. My fellow director Chris just turned in his S-Type Jaguar (now discontinued) and got a new XK. Yowzer! So, this is what I've been "test" driving for the last bit. 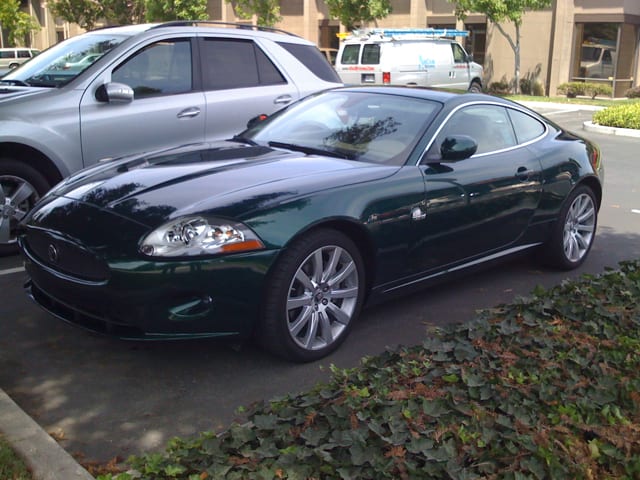 It has the paddle shifters right conveniently located on the back of the steering wheel; right for up, left for down, six speeds. Takes a bit of getting used to, but I can definitely see the performance advantages, particularly on winding roads that require a lot of quick reversal steering. My BMW X5 has a 6-speed auto/semi-auto transmission, so I'm already well versed in the impressive advantages of close ratios for performance. Hint: you drive the tachometer, not the speedometer. That may sound like a "Duh" to people who've driven a high-performance 4-speed, but let me just say that's it's way far easier to stay right in a very short power band, and particularly so with semi-auto shifting, by which I mean that you control the execution, the car controls the fundamental procedure (i.e., no clutch or necessity of letting the engine revs dive).

Having said that, if I was to have a pure sports car, such as my '86 Vette, I'd definitely get a standard 6-speed. Oh, speaking of Vettes, a nice late-model red one pulled up alongside on the freeway. First time in a long time I didn't feel a pang of longing envy.