Mark Sisson dissects "The Zone," and precisely so. I respect Barry Sears, and certainly, his prescriptions are far better than, say, those of the attention grabbing low-fat fat-face Ornish (I emphasize: huge understatement).

I tried that diet (Zone) for a couple of months back in the mid-90's when the original book came out. I soon knew it would never work for me. Mark's section on "hunger" is really the essential point.

In the end, it suffers from the same deficit as I think the paleo diet does. Fat is king. It's more than twice as efficient by volume than either protein or carbohydrate, and it's what really makes the difference in dietary success, and I'm thoroughly convinced of that. Fat (animal, coconut –avoid vegetable oils) is what makes the difference between giving in and dialing Pizza Hut, setting off a cascade of diminished-self-image failure, and going in and fixing a cheese omelet cooked in butter.

At least it was for me.

I said "was." Funny thing is, and you may have noticed: I don't blog nearly as much about the wonders of fats. That's because I don't eat nearly as much, anymore. And it was completely natural. Once I reset my genes, over months and months, I've come to now eat far more "normally." I'd call it something, like: "The Intermittent Diet." The key is intermittency in obsession or excess, and moderation. In a sense, scarfing down loads of fat seems, to me, just about as compulsive and unnatural, in the end, as eating an extremely stupid low-fat diet. But sometimes I eat extremely low fat — over a period of some hours. Just the other night around the campfire, for instance: there were some carrots. So, I munched on carrots to the exclusion of all else. Sometimes I gorge on fruit. Sometimes I gorge on fat. But I don't do any one thing chronically. It can be meal-to-meal, or even day-to-day, but never longer than a few days in a row. And the shift is natural. Once you discover the wonder of Real Food and get out of the processed food crack-house, everything changes (but it takes months). The point is that you can be a true "foodie," as am I, and yet become highly indifferent to any particular dish or any particular meal. You simply look at the whole thing differently, which, I understand mystifies lots of skinny people and gets knowing nods from lots of fat people.

This is key to the whole approach: Primitive man had zero control over the environment. He generally had primary control only over locomotion, which is why they moved around a lot. That's fundamental; and so we have, by modern convenience, removed the most fundamental aspect of primal existence from our quotidian motivation: most of us can easily live in one spot our entire lives. I really wouldn't want it any other way, but the point is that our genes don't know or understand the difference. They are either active (expressed), or dormant. The good news is that we can simulate the stressors and expressers through intermittency. I think that eating in the whole range, from extreme low fat to extreme high fat, within the confines of Real Food, is really the way to go. The constraint implies that the diet is usually going to be of a rather low carb nature (in calories or relatively), and certainly free of most grains, wheat in particular. But the real point is that by switching it up, you fool your genes into "thinking" that you're migrating, experiencing varying bounty along the way. And then they do their job, like they were evolved to do.

In the end, Dr. Sears misnamed his diet. It's far too restrictive, prescriptive as to have the concept of a "zone" applied. "The Range Diet" would have been more apropos, implying a linear range. A diet proscribed by a fully spacial geometry (zone) would of necessity be one of intermittency in multi-variable macro-nutrients, probably with a big edge for animal fats, given their high-value energy efficiency.

I had occasion just a bit ago to reference a couple of of posts from the past concerning some unconventional treatments for cancer. Given that there are so many new readers and that this information is so important, I'd thought to highlight those posts.

The first has to do with an ancient idea with and even more ancient basis. We didn't evolve side-by-side with refrigerators and freezers. In other words, food was often scarce, so we went hungry sometimes. And, even if food was plentiful, if we're anything like modern carnivores or omnivores, we probably get a pretty good hunger going before bothering to get food. After all, if plentiful, success was assured, so why sweat it? Incidentally, this is now my mode of operation. I never care that much about any particular meal. Hunger is relative, and not very important. Indeed, it's even sometimes enjoyable. Anyway, it turns out that normal cells insulate themselves against stress when you're fasting. However, cancer cells can't do that. The result: fasting protects healthy cells against the ravages of chemotherapy, thereby tipping the balance in the war of attrition that is chemo.

Next up concerns the simple logic of macro-nutrient composition applied to the fact of the feeding behavior of cancer cells. Short version: cancer cells are very inefficient sugar hogs. Get it? Be sure to read all the links. It's astounding; and no, there's none of the typical cancer quackery.

Later: Ha! Lets' tantilze, shall we? Not going to actually read all the links? Well, this quote come from one of them:

A mouse model of human breast cancer demonstrated that tumors are sensitive to blood-glucose levels. Sixty-eight mice were injected with an aggressive strain of breast cancer, then fed diets to induce either high blood-sugar (hyperglycemia), normoglycemia or low blood-sugar (hypoglycemia). There was a dose-dependent response in which the lower the blood glucose, the greater the survival rate. After 70 days, 8 of 24 hyperglycemic mice survived compared to 16 of 24 normoglycemic and 19 of 20 hypoglycemic.10 This suggests that regulating sugar intake is key to slowing breast tumor growth.

I'm headed off soon for the weekend, no WiFi. So, this may be the last entry until Sunday night. So, let's make it a food pic, eh? 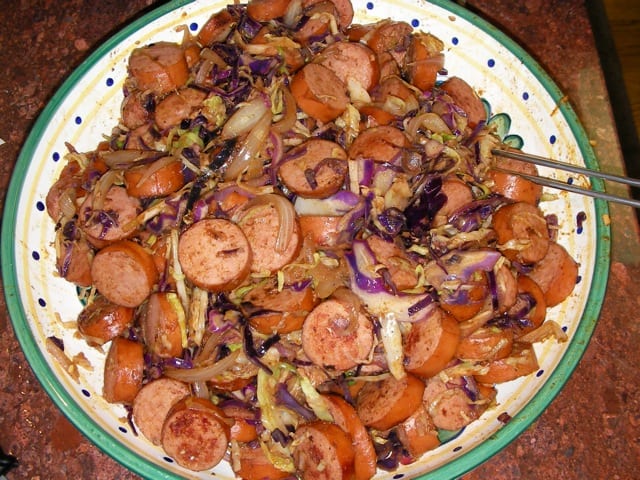 Polish Sausage (uncured), green & red cabbage, onion. Super simple. Maybe 10-15 minutes total, 5 or so in the Wok. This was a while back, so I'm not sure exactly what fat I cooked it in, but I'd say coconut would be just fine.

For those who took the survey (thanks), answered question #8 in the affirmative, and for whom it may not have been strictly hypothetical, please feel free to email me for discussions. No obligations, of course.

As I said, you'll not be contacted — in fact, I have no way of knowing identities anyhoo — but please do contact me if interested in participating.

Well, I can assure you that I had no idea that was out there when I chose the new name for the blog.

How, after all these years, does the godfather of fitness do it? By balancing the brain with the beast…

Yep, pretty much. Yet, I rather like to think of it as a full embrace of your animal nature and a full embrace of your rational mind. 100% and 100%; 1+1=3. Balance implies dichotomy, and there is none. You are fully, 100% animal biologically and to the extent that you compromise that in any way, you'll suffer (and your mind along with).

But I'm sure I know what Jack means.

So, thanks for viewing.

Here's a theme on what I generally say to people who extoll the goodness and health of fruit juices. Would you eat two dozen oranges in a sitting? I've been known to eat two, but the couple dozen required to make a large glass of OJ? Nope, and this is the problem with highly processed foods: concentration.

Grilled swordfish with lemon garnish. Green beans, carrots, yellow squash and a bit of sweet potato (all previously cut up, uncooked leftovers from a seafood Thai curry the other night) stir fried in coconut oil, then finished with a couple of dashes of toasted sesame seed oil and whole seeds. 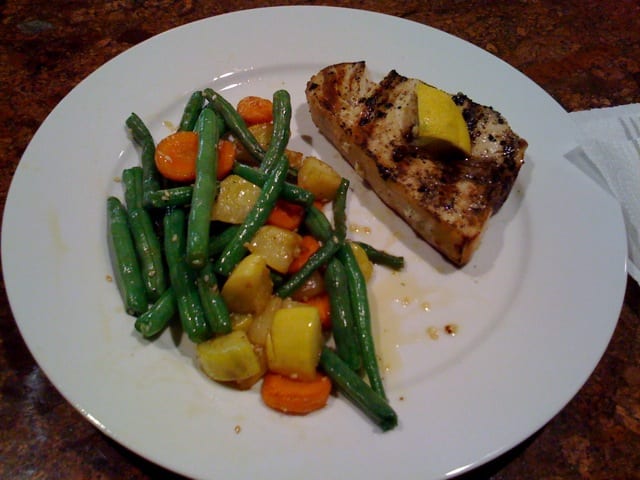 How badly some people treat their pets. Some are actually ignorant and arrogant enough to feed dogs a vegetarian diet. I’ve seen it. It often makes them fat, immobile, flatulent snorting machines. Then they die young, often of heart failure.

Here’s our two beasts during a hike behind our cabin in Arnold, CA. American Rat Terriers. Nanuka (“Nuke”) in the foreground is a 3-yr-old champion female. Rotor, in the background, a 9-yr-old male in pristine health. 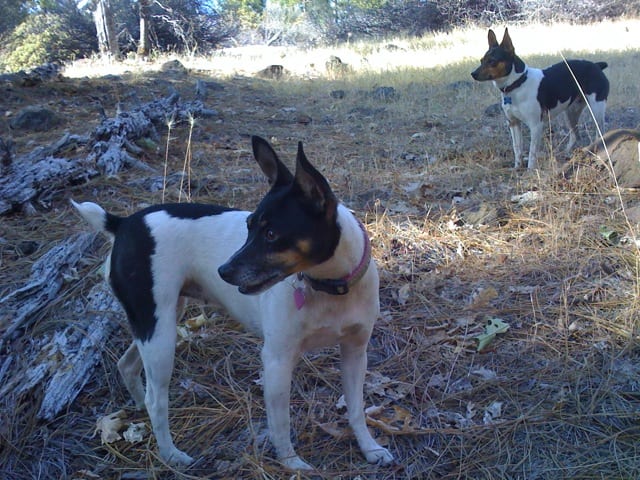 There’s three things we do that keeps them as fit as they are.

Now, if you have the time, money and attention, then maybe BARF is for you. But while I’m interested to try it out on the munchkins, I just don’t see how it could improve things. Anyway, for better than a year, now, they’ve been fed exclusively EVO. For snacks, they get the dried chicken and duck meat…ingredients: chicken; duck. The end. 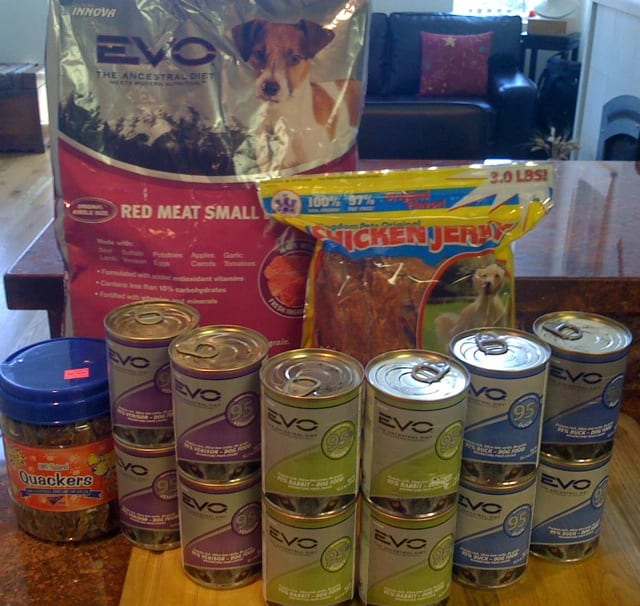 It’s pretty easy to obtain, but go to all the stores in your area that carry it. Some have better stock than others. The dry comes in red meat and chicken / turkey. Canned comes in (all 95%) venison, rabbit, duck, beef, and chicken / turkey. I rotate off on the dry, and then get the three more exotic canned meats. Needless to say: they love ’em, especially in the morning when they each get a teaspoon of lard mixed in.

Curiously, they will often spontaneously fast and let their bowls sit there untouched until the evening. I never worry about it. I’ve thought of fasting them every now and then in order to simulate natural pressures. But I don’t think I could take those perplexed, sad eyes glaring at me. And, since they seem to fast on their own intermittently, it relieves me of the chore. 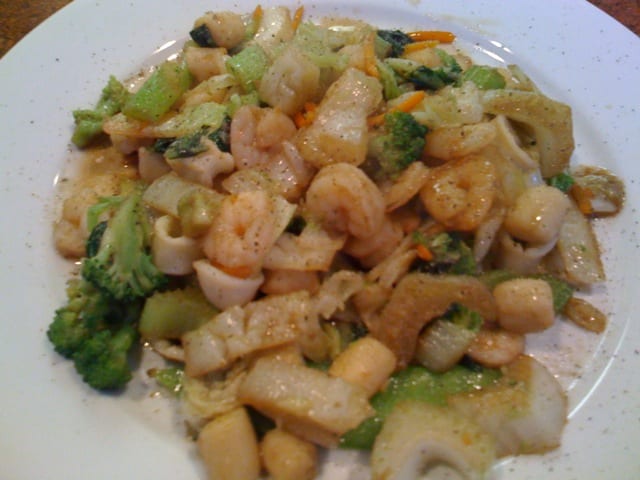 A few weeks back, I'd guess. It's a pack of frozen Seafood Medley from Trader Joe's (shrimp, scallops, calamari), along with celery broccoli, and maybe a thing or two other I can't recall. It's fried in the wok in coconut oil, of course, then sprinkled with paprika and black pepper.