That's funny. Turns out the top search term on the blog over the last few days has been for "cold shower." I suppose it's because of this, a bit of "Richard-Lab." Now, that's actually a bit of a longish post, but I'd say one of my more important ones, because rather than an assemblage of good work by others (for which I'm eternally grateful and will always acknowledge), this is original work. The rest of this isn't going to be fully comprehensible unless you go ahead and take the 5 to read it.

Well, that was just over a week ago. I was unable to attempt a duplication last Monday due the holiday, with the gym closed by 3pm. And, out of the overnight 4.5 pounds of fat loss, I retained 1.5 pounds of it. However, even though I didn't do the cold plunge on Monday, I did do a fast and ended up back at 195ish. Then, Thursday, I ate a huge breakfast at around 10am. 1/2 pound burger, four eggs (cooked in butter), 4 strips of bacon, and fruit. I slathered the eggs with a good tablespoon of butter to boost the fat. 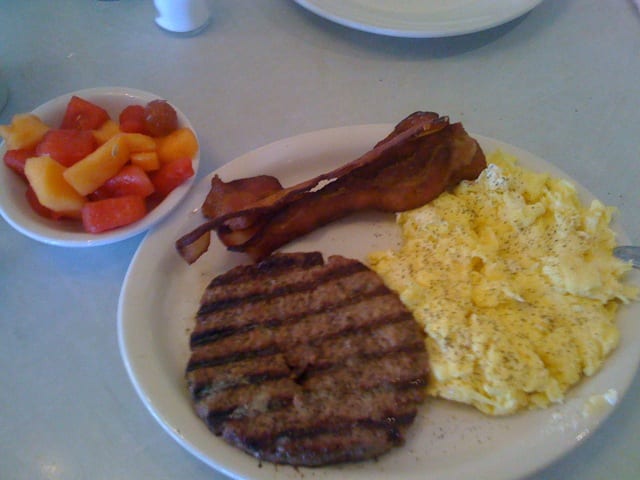 I went to the gym around 7pm, and this time, after the heat stress outlined in the linked post, I did a full 10 minutes in the cold plunge. Interestingly, the violent shiver came in at 4 minutes or so, but I developed an interesting technique. The shivers come in waves and utilize lots of energy. If you're out of glycogen, that's being fueled by gluconeogenesis. You've already got the hGH surging, owing to your evolutionary adaptive mechanism of protecting lean mass in times of lean times. Makes sense, doesn't it, marketing hype for "energy" and "gainer" products notwithstanding? At any rate, I felt I might get out at 4 minutes, but then, with each wave of shiver, I'd go to a full body flex; and I mean intensely so. The result? A wave of actual warmth that would last for a good 20-30 seconds. Now, since that wasn't being fueled by all those grains or sugary energy drinks, I hadn't eaten anything in 10 hours, was low to nonexistent in glycogen to begin with (I almost always am), growth hormone is protecting lean mass, and low insulin is permitting fat to exit cells, where did the energy come from? Fat.

The logic in unassailable, and I'll add another thing: every professional body builder in the world knows all this. They carb load so they can work out hours per day. I work out 1 hour per week.

Weird thing is that after discovering and employing this technique of body flexing with each onset of shivering, I could have stayed in even beyond the 10 minutes I stayed in the 55ish degree water. But I got out, took a cold shower — for the purpose of extending the fat burn — cleaned up and went home. However, 10 or 11pm came along and I was hungry again. Real hungry. I try to listen to my body, so I did a cheat. I ate some food, but not a lot. I went to bed, slept fine, and as usual, had no hunger upon waking. But unlike so many other experiences with fasting, hunger came on with a rage pretty early and stayed with me all day, until the workout. And then, for the first time ever, the workout didn't kill hunger 5 minutes in. Not even 25 minutes in. It was a real drag from start to finish and I nearly stopped it. Instead, I rallied in the last few minutes and finished it out. The one plus is I didn't have to cut the weight at all. 205 on the bench, just like I'd worked up to some weeks ago. I'd been having very explosive workouts, so this was a decent lesson for me in limits.

There are times when you really ought to back off. And that's what I'm going to do. Tomorrow, I'm going to work out in a relatively fed state for the first time in a long time. The weight? Well, I added a couple more pounds to the loss; that is, 193. So, 6.5 pound loss in about a week, no loss of strength. 6.5 pounds of fat loss in about 8 days or so is asking a bit much, I suppose. On the other hand, I was stuck at 210 for a couple of months, then at 200 for a couple of months. Now, it seems my body is ready again to give up the fat. I hope I blow through 190, then 180 on my journey to an estimated 175 to achieve 10% BF.

I think there's a very large unexplored area in terms of cold. Think about it. We evolved over millions of years with no central heating or efficient layers of clothing. Certainly, nobody wants to live in a state of chronic cold — especially exacerbated by insufficient caloric intake. That said, we do have the ability to think these things through and experiment with ourselves. I've got 15-20 pounds of fat loss to go to reach the goal of <10% body fat, along with the concurrent goal to not only preserve, but to build lean mass along the way. If the cold can help me get there, I'm going to use it.

But maybe a bit more prudently going forward. It appears to be an extremely powerful tool.