Arnold “The Girly-Man” Schwarzenegger Gets Milked By Big Dairy

So, how much would you pay to make sure your neighbor doesn’t drink milk or cream in raw form, i.e., non-pasteurized or homogenized? How much? A few bucks a month? No?

I guess The Girly-Man Governor thinks otherwise, having recently vetoed popular, bi-partisan legislation (SB 201) that has the effect of making it even more difficult (AB 1735) than the already ridiculous level of compliance California’s two raw dairies had to go through in order to sell raw milk products to the 40,000 Californians who already enjoy them and have been enjoying them for years. I drank both raw cow milk and goat milk as a kid, and we made various products like butter and cottage cheese ourselves. We didn’t need anyone’s help, especially not from a girly-man (pdf).

I am returning Senate Bill 201 without my signature.


This bill weakens food safety standards in California, something I cannot support.

Based on fears with no basis in fact…

Now it ought to be the plain obvious truth that the baseless fear-mongering taking place is and has always been the hysterical fear mongering contra raw milk. So he’s a lying girly-man too; but, of course, he’s now a politician and he opens his moth, so nothing so surprising there.

I now consume raw milk from Whole Foods Market in pretty modest quantities and have been for the past several months, even though not strictly a paleo food. But I tollerate it very well and have no adverse effects; whereas, pasteurized milk sometimes makes my stomach and intestines churn for several hours. Never happens with the raw. There are two dairies, Organic Pastures and Claravale Farm. Whole Foods has both. I had been getting the Organic Pastures but they were out of whole on the last trip, so I got Claravale. Big, huge difference in taste, with Organic Pastures being so superior I can’t even describe it. Apparently, Organic Pastures are exclusively grass fed, whereas, Claravale uses organic feed (grains). Again: big difference. Here’s Organic Pastures’s Mark McAfeee describing his relationship with his customers. Looks to me like he cares a lot more about them than the Girly-Man, the Dairy Lobby, you, or anyone else. They’re doing just fine without anyone’s “help” or “protection.”

I wish both dairies well, and hopefully, more tax dollars aren’t put to work to “protect you.” Like this, where Mark Nolt, a farmer in Pennsylvania, gets hauled away in cuffs for selling raw milk products to his friends. 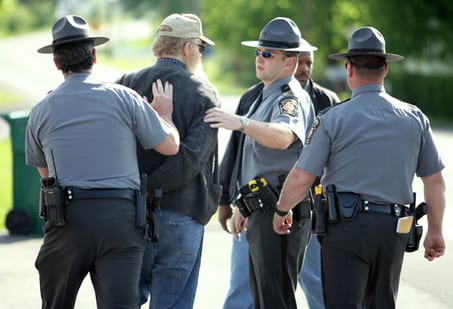 Just another day in the “Land of the Free,” as I like to say. But let me end on a note of magnanimous conciliation for governor Schwarzenegger: next time Big Dairy comes a callin’ for your periodic milking, you might consider applying some old fashioned Bag Balm. I understand it’s udderly fantastic and effective.