Well just as I was finishing up a comment on Stephan's latest entry (the whole "acid-base balance" thing) — ironically enough about not being so obsessed with food — I decided to go check out Debs' fabulous food blog, as it had been a while (I'm gonna have to put that in my Other Resources roll).

I think I know what's for dinner, tonight. And what was I saying about obsession? Seriously, I love love love pizza. It hates hates hates me. In a big way. We're talking nuclear heartburn, virtually every time. Of course, it doesn't ever help that because I love it so much, I tend to hugely pig on it when I eat it — or used to, anyway. I've probably had a total of less than a dozen slices in the last year, a slice or two at a time, at various events. That didn't seem to bother me as much. In the old days, a dozen slices was an average pizza night. Here's Debs' creation, but you'll have to head over there to get the recipe. 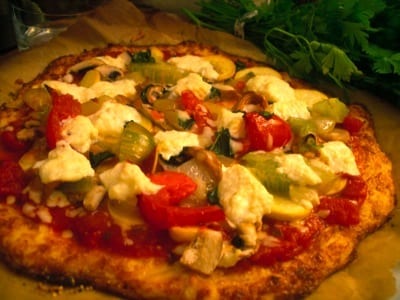 I'll let you know how it goes. This sounds very promising, as I've gotten to where I can do a stove-top started, oven-baked finished frittata in such a way that the cold leftovers from the fridge resemble left-over pizza (which I also love).

By the way? It's not the fat in the pizza that gives me the heartburn (for those as yet unaware). It's the high carb, wheat, and gluten.