Is The Tide Turning?

I like to think that other than accounting for long tails (lottery-style luck) that, for most, where you get in life is somewhat related to (less than 'directly proportional to' or 'a function of') how well you see coming trends and modify your life in ways that capture the tide. This could be as basic as an employee of a buggy-whip manufacturer finding a job with a steering wheel manufacturer (when he'd have been in high demand, i.e., early) to a master-level electrical engineer inventing the next [..?]. The point is twofold; first, that lots of people see changes coming enough that they make a wide range of changes in their lives with a consequent variety (meaning: distribution) of upheaval; and second that, a very few pin the tail on the donkey, and change our lives forever.

This is the rational 100% of the Animal at work and, it's what differentiates us from the others (in some function; there are other differentiations). This is why we must — now more than ever — respect our Animal evolution. The Age of Obesity isn't a fad — not as I see it — but a direct consequence of our ability to increasingly control our environment, the aspect of which I'll focus on is the food we eat and, when and how much of it we eat.

As for me? Well, you see the direction of this blog, so you know where my bet is placed.

If it were just two things, I'd have blogged them each. But since I have three things for you, I'll do it in one post, and you can chase down a few of the particulars. First up was an entry by Doc Eades the other day, linking to this video. Well, I don't know if I share Doc Eades' utter enthusiasm, but, then again, I'm not running the stubborn-arrogant-ignorance gauntlet 24/7, established exclusively by those fallaciously entrusted to know better.

Medscape is a subscription service available only to physicians and is as mainstream as it gets. The lead article in this weeks issue is not really an article, but a video lecture. One Dr. Sandra Fryhofer lectures the mainstream docs subscribing to Medscape on what the above study shows. She points out the weaknesses of the low-fat diet and is positively enthusiastic about the low-carb diet.

Next up concerns someone highly regarded in this generally described "leanness community:" Craig Ballantine. I got his book, and it's good stuff. One of the things my trainer told me at the outset was that I'd eventually get used to anything, but to achieve better results I should change up my workouts. That's what we do. That's what Turbulence Training is essentially about. Don't do the same thing all the time. Change it up a lot, big, and do it fairly often.

By virtue of buying his book, I have the pleasure — I assure you — of receiving his almost daily emails to "upgrade" to this and that (at additional cost). That's fine, and I can quit receiving those emails whenever I want, but, this one caught my eye.

But first, you see, I had read the book and, though the exercise material was right on, the diet and nutrition advice sucked. There was not enough emphasis on skipping processed food, along with too much emphasis on small, numerous meals, and never — NEVER — skipping breakfast. Total BS; but, I approach this mainly from diet and, he, from exercise. I saw the thing in context. So to the email…

Then I read the book. The research he covers showed me just how
brainwashed I had become by the supplement company ads (even though I was smart enough to not buy their supplements, I was still convinced that all fat loss dieting had to be borderline obsessive-compulsive).

Brad's ESE is one of the best nutrition books I've ever read, and I went through it in just one evening, because not only was I fascinated by the science, but also by the dieting myths Brad destroyed.

In fact, Brad created this "anti-diet" program for people that are sick and tired of trying to measure out and eat 6 small meals per day. If you are frustrated and overwhelmed by trying to follow that "bodybuilder nutrition lifestyle", then Eat-Stop-Eat is for you.

I mentioned Brad's ESE back at the end of last year, after I'd done a couple of fasts on my own; and Brad's book reinforced everything I had learned, while giving me a few new ideas to test on myself. Now, Craig is obviously reselling Brad's book and, so, is obviously (should be) getting something for that. My judgement is that Craig has being straight up. He probably has hundreds of "gurus" hitting him up for the sort of partnership he's developed with Brad. He has to make his choices, like anyone else, and judging from his book and background, I'm betting he's best served by going with what he's personally verified to work and have some value.

I think his endorsement is yet another affirmation that ancient fasting is, once again, cutting edge. I told you so. 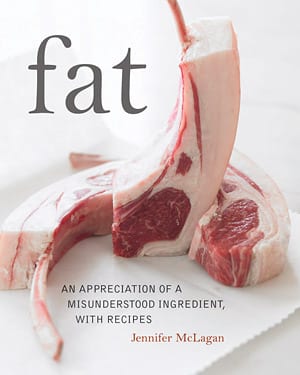 Finally, Matt at RashyNullPlanet emailed about fat. Not just any fat. Jennifer McLagan's fat. It was linked in lifehacker, who linked to the book, and to the article in Salon. The book cover itself is, I think, astoundingly beautiful. It's a perfect melding of the technology that makes this possible and the Animal we can individually set free.

I have the book in my hands. Of what could I tell you, first hand? Oh, lots, but I'd have my particulars. The very first sentence of the intro, perhaps? "I love fat."

From the beginning of human history until the middle of the last century the word fat had positive connotations.

That's why both "modern Ignorance" and "primitive wisdom" play a role as categorizations in this post.

But I think what I like most is the dedication page: "For all the Jack Sprats out there—-you're wrong!"

Jack Sprat could eat no fat
His wife could eat no lean.
And so between the two of them,
They licked the platter clean!

Here's another article in Canadian news I came across while bouncing about for this post.