I prepared it last night. Did it on a baking stone and it came out just fine. See for yourself. 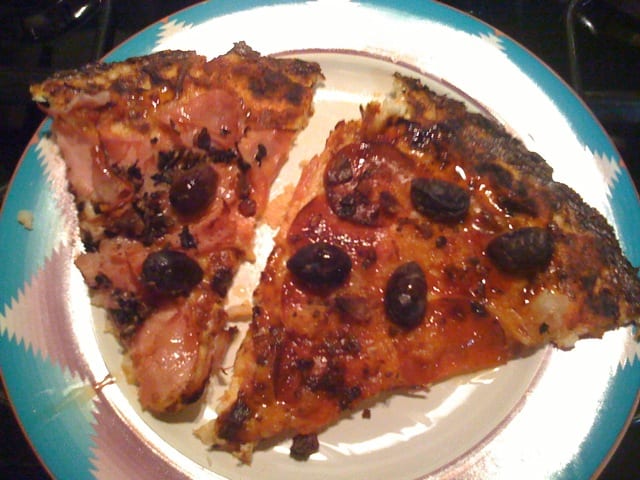 It was a 15-incher, half & half. One side was pepperoni & onion, and the other ham & mushroom. Greek Kalamata Olives par tout — with the pits, which is the only way to go on a pizza. They shrivel just a bit and the tastiest part is the meat right up next to the pit. In order to get max flavor from both the onion and the mushroom, I ran them through a cheese grater. The canned sauces at the supermarket all had dammed high fructose corn syrup (HFCS). …The hell? So, I just got a small can of tomato sauce and added pizza spice (oregano, basil, garlic) and some additional garlic powder. Also, even though there's lots of cheese in the crust, I did put additional over the sauce in the standard pizza-making fashion.

I doubled the recipe, and like Debs, didn't spice the crust. For a 15" stone, I first spread some bacon drippings very thinly, then used a plastic spatula to spread the dough. The stone had an edge, so I was able to build it up around the side, rendering a pretty thin crust in the middle. The one downside is that it's not nearly as rigid as wheat dough. I think next time I'll try a thicker crust. I also intend to experiment with things like celery root and almond flour.

It was very filling. I had not eaten a thing since breakfast and I was stuffed midway through that second slice. Very filling and satisfying. All that said, and it's very good, it does lack the wonderful chewiness of standard pizza.

Final tip: get some of those red pepper seeds, and rather than sprinkle them on the pizza, add a load of them to a few tablespoons of olive oil, mix them around, and let 'em set for a while, as you're making the pizza. Then drizzle the olive oil all around.