Via Mark's Daily Apple, comes this Prevalence of Obesity map. 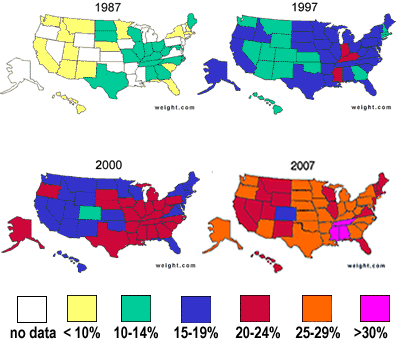 Click right here to see an animation of how it changes year over year from 1985 – 2007. Then, stop to consider that at no time ever in history have there been so many diet programs, TV shows, books, programs, emphasis — and by far and away, most of the diets all have a similar common theme: less fat (especially animal), more "whole" grains.

So: how's that workin' out fer ya?

Later: In that same list of links at Mark's, there's this: "How do French Eat What They Want and Stay Slim & Healthy?"

Despite a diet stuffed with cream, butter, cheese and meat, just 11 percent of French adults are obese, compared with America’s 33 percent. The French live longer too, and have lower death rates from coronary heart disease. They don’t diet and they don’t spend hours panting round the gym.

I lived and worked in France for two years, most of my meals taken at the facility I worked at, so authentic French. Never in my life did I eat so well, with so much luxurious animal-based meals and fats of all kinds. My weight reduced about 15 pounds in the first few months, stabilizing at about 5 pounds more than my high school weight of 165. When I returned to the US in 1992 I was 170-175. I immediately added 15 pounds, then bought into the low-fat (20% of calories) nonsense. Before I got my head on straight I was at 230. You know the rest of the story.